Washington University in St. Louis’ 560 Music Center was built in 1930 as the Sha’are Emeth Temple. Almost 50 years later, the Jewish congregation moved to a new facility. The beautiful old Art Deco building then became the home of the St. Louis Conservatory and School for the Arts, then the St. Louis Symphony Community Music School, which eventually joined with Webster University.

Washington University purchased the 45,000-square-foot facility in 2005, renovated it, and reopened it in 2007 as the new home of the school’s applied music program.

In addition to faculty studios, ensemble rehearsal rooms, practice spaces, and storage, the building offers three performance spaces that accommodate anything from solo recitals to symphony orchestra concerts. The largest of these, the E. Desmond Lee Concert Hall, occupies the former Sha’are Emeth sanctuary and seats 1,115.

“We teamed with architectural firm V Three Studios and with Conference Technologies, which sold and installed the job,” reports acoustical & systems engineer David Bick of McClure Engineering, which designed the new systems. “Volk Construction, the general contractor, managed the project and installed the acoustical work, and also deserves kudos for a very good job.”

The hall’s previous system consisted of a handful of stage-stacked arrays that were wheeled out on a cart and put onstage. “There were sightline issues, and it didn’t cover some of the seating areas well,” Bick recalls.

The solution was a combination of extensive acoustic treatment and the new IC Live Gen5 sound system. To manage the acoustics without detracting from the hall’s aesthetics and architecture, the team hung clear acrylic panels above the main part of the stage to redirect sound out to the audience and enable to musicians to hear each other onstage. Quadratic diffusors were also installed on the front side walls, along with diffusing and absorbing elements on the rear and rear side walls.

“The hall hosts a variety of events,” observes Bick, “but it’s primarily a concert hall for symphonic music, so we tuned it to about 1.8 seconds of reverb. They have some jazz and other acoustic music but the space was not designed for loud rock events.” 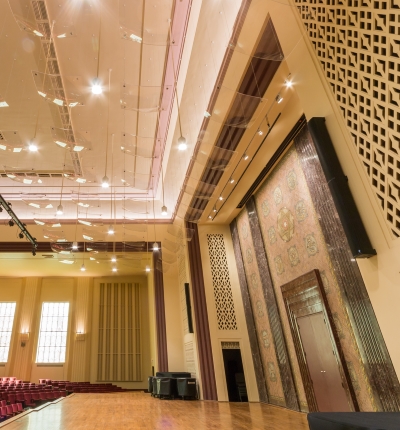 The fan-shaped concert hall’s many artistic flourishes include historic art deco glass windows and a 1,575 foot mosaic stage backdrop. Because aesthetics were mission-critical, the team didn’t want to fly a classic array or point-source loudspeakers.

“It was important that the speakers have tight pattern and low-frequency control, which is why we went with Renkus-Heinz IC Live,” Bick explains. “We were able to get more than we needed in terms of overall SPL, and a bonus was that most of the seats have a true stereo image, which is pretty cool.”

For the mains, McClure Engineering’s team specified a pair of Renkus-Heinz ICL-F-DUAL-RN steerable arrays, mounted to the left and right front edges of the stage walls. The IC Live Gen5 loudspeakers’ steerable beams combine with the acoustical treatment to keep the sound on the audience and off the walls, windows, and ceiling. The hall seating is only about 60 feet deep, with a gentle rake, so the IC Live loudspeakers’ ability to steer the beams away from the rear walls was especially important.

Read More
Charting The Mix: The Value Of Peeking Under The Hood Of A Pop Song

A pair of Renkus-Heinz IC212S-R subwoofers are hidden beneath the stage. “We modified an area underneath the stage and covered the openings with custom perforated metal grilles, which were painted to match the rest of the stage front to minimize visibility,” Bick notes.

Although the beam steering and much of the EQ is done using the IC Lives’ onboard processing, a Symetrix Prism 4×4 DSP manages the overall system using a Dante network to aid in the audio distribution. The university bought a new console, and the install team tested and integrated it into the new system.

“There are some long runs, and it’s an old facility, so it wasn’t easy to get audio from point A to point B,” allows Bick. “Using a DSP with Dante gave us a way to get clean, noise-free signals where we needed them and do a little more processing.”

The IC Live Gen5 system and acoustic treatment has proven to be the right combination for the room. “The system sounds very good,” Bick agrees, “and it looks fantastic as well. The Renkus-Heinz ICL-F-DUAL-RN arrays and subwoofers deliver clear, clean audio right where we want it, without detracting from the beauty of the hall. We give a lot of credit to our partners for the success of this project; everyone did a great job.”