Home of Florida Repertory Theatre, the Arcade Theater Fort Myers was rescued from obscurity in the 1990s.

John Kiselica, the resident master electrician and sound designer says the theater is now in vigorous good health, sijnce the addition of loudspeakers from d&b audiotechnik. “We stage a good and varied program of comedy and drama, but we have struggled with musicals due to equipment; until now that is.”

“Our musical director and I have been awestruck by what you can get out of this system,” says Kiselica, yet as he indicated, the path to live music has been tricky. “For comedy and straight theater, the room is so live that we don’t need sound reinforcement, except for sound effects and underscoring. But we have seen more and more demand for musicals, something our aging sound system simply couldn’t handle.”

Kiselica approached BCI Integrated Solutions, an AV and building technology specialist with offices in Tampa, Orlando, and Fort Myers. “Prior to me being here I’d been touring a musical across the US. I’d experienced d&b audiotechnik systems a lot on that tour and that was my preferred route. But of course, we are obliged to compare different manufacturers’ systems, something BCI could offer.”

“The theater had requested proposals using two different brands of sound system. They also felt that d&b was the more premium product, but probably one beyond their budget. Their aim was to bring in larger premium touring productions, and a new audio system would be part of being able to attract such acts. When we looked closely at what was required, we could install a d&b system that would conform to all their needs and still fit their budget.” 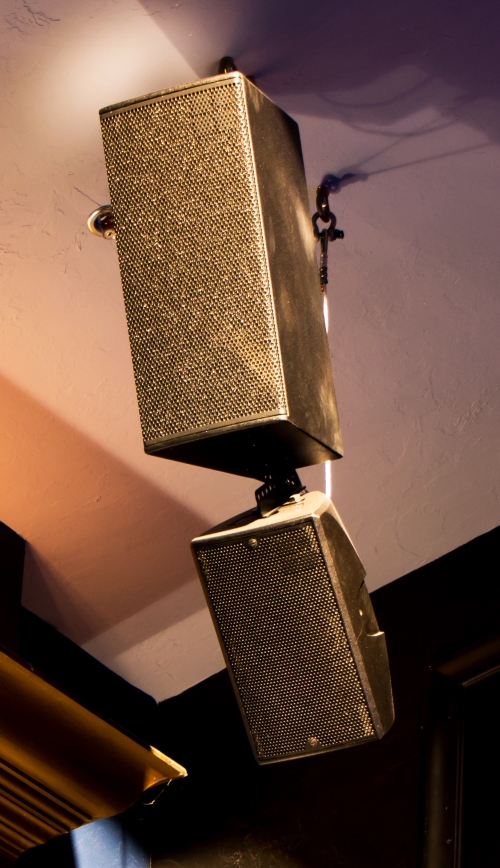 That didn’t mean it was simple. “It was challenging for BCI,” says Kiselica. “This venue has gone through many changes in its life. All those things leave a legacy in terms of the physical structure. The audience might not see it, but when you start to work inside the building you certainly find them, and they can be hard to work round.”

Interestingly Fraioli had a second consideration beyond the arcade’s architectural quirks. “We designed a L/C/R system. Small and simple, it covers the audience perfectly. The theater itself is an early twentieth century vaudeville venue seating almost 400 people; although there is a balcony, it is small and only used for tech.

“Providing the rigging support was a big thing in a heritage building. However, with care and consideration we installed all new mounting points so we got the loudspeakers positioned exactly where they needed to be. Left and right is d&b Y-Series Yi7P loudspeakers, with a wider point source Yi10P on center. Correctly positioned and aligned they give ideal coverage +/- 1dB across the whole seating area, and as rigged, get in under the balcony.

“The interesting thing is that when John first approached us as a company we were looking for a premium brand that we could build a relationship with; a brand that would work with us to achieve best quality results. We had already selected d&b for this role, but the arcade was to be our first project together.”

Fraioli contacted Casey Johnson, d&b’s regional manager for South East USA. “Casey had laid out the ground well. We understood the company, liked the reputation, and saw the technical support as strong. Their Application Support department confirmed the design package we developed and for a first project this was easy and smooth.”

Even so, musical theater demanded a little more. “For musicals we needed full range audio,” says Kiselica. “We had a sub in our old system, but it was a sub in name only. Nowhere near powerful enough, it had to be driven to destruction to make any sort of noise, so for practical purposes it was unworkable.”

Fraioli was even more blunt: “Not only did the PA sound bad, there was way too much LF going back onstage. We selected the d&b 27S-SUB to compliment the Y-Series: it’s a passive cardioid sub and keeps the energy well off stage. We were also able to hide them within pre-existing cavities high up in the architecture, one each side at the same level as the flown Yi7P tops. The different time position was minimal enough for top and sub to behave as a single source, producing a very pleasing and coherent sound field for all parts of the audience listening area. The whole system is remarkably efficient, just two of d&b’s 10D installation amplifiers were required.”

The 25th Annual Putnam County Spelling Bee, a delightful comic musical, has been a regular event at the theatre. “This is my third year here,” says Kiselica, “and I’ve seen a lot of investment by the theater in all departments, lighting, staging, and now sound. They are not averse to spending money if they can clearly see the benefit.

“For Bee, it’s been an absolute dream to mix on; the sound quality and coverage are more than I had imagined. We had ten actors on stage, all on lavalier mics, with a small band upstage left on a discreet stage as part of the gymnasium set. I did the classic approach in the sound design; orchestra in the L/R mains, with the actors’ voices from the center cluster. Yes, audience members could tell the performers were mic’d up, but it wasn’t blatant and with a couple of additional frontfills to pull the image down, it was easy to overlook because locating the singers’ voices in the performance space was remarkably natural.

“BCI has done a great job in all respects; the improvement in vocal intelligibility is amazing, something our audience feedback surveys confirm. Almost everyone that responded remarked how easy it now was to follow the narrative.”

Bee is a fun musical and has certainly sealed the reputation of the Arcade as a theater and company alive and well and going places. To borrow a phrase from that audience feedback survey, ‘It has never sounded so well’.