High Energy: The Microphone Approach For Cage The Elephant

Over the course of relentless touring – first in support of their 2008 self-titled debut album, and more recently, 2011’s Thank You, Happy Birthday – Cage The Elephant has built a reputation for raucous, high-energy rock performances during which they leave everything on stage.

The main factors informing the approach of the band’s engineers, Jay Rigby (monitors) and John Hagler (front of house), is accurately capturing and amplifying that energy.

The two have had plenty of time on tour to perfect their technique. “We’ve been on the road pretty much this entire year and most of last. This is the first time I’ve been home for longer than a week this year,” says Rigby, who was just finishing up a stint with As Tall As Lions when he landed the gig with Cage.

Previously, he owned a sound company and worked a house gig at New York City’s Terminal 5 live music club, and since relocating to LA, freelances when time permits and does occasional shows with Roberta Flack.

This, fair to say, is a much different gig.

“They (Cage) are an extremely loud rock and roll band, so we have to do a lot of close mic’ing because of the sheer stage volume,” Rigby explains, adding that one of the main challenges is keeping tabs on lead vocalist Matt Schultz. “He’s all over the stage and in the crowd half the time.”

Schultz also has a tendency to point his microphone at the mains: “Not regularly, but it happens,” notes Hagler, who’s also worked with acts such as Cut Copy, Wolfmother, Donovan Frankenreiter and Fountains of Wayne. “So you’ve got to keep your hand on the pan knob,” he adds, laughing. 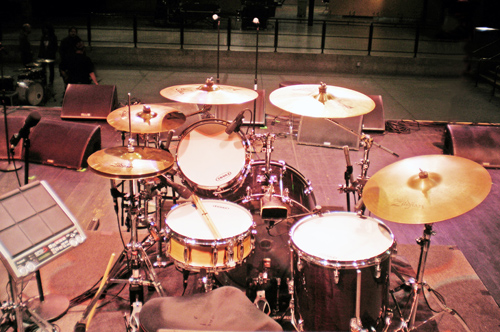 Drummer Jared Champion’s kit is mic’ed with a wide range of mics, most of them clamp-mounted..(click to enlarge)

Stage Mayhem
Providing the band with what they need to hear on stage involves a mix of wedges and in-ear monitors. Each player has a wedge, but guitarist Lincoln Parish and bass player Daniel Tichenor augment their stage sound with Shure PSM 900 wireless personal monitor systems and JH Audio JH16 Pro custom earpieces. Schultz gets three wedges and two mixes: “The center is instruments only and the outer two are vocals,” Rigby details.

All processing for monitors is achieved onboard Rigby’s DiGiCo SD8 console, while processing on Shultz’s vocal for the house depends entirely on the desk Hagler is using. “On a digital console I’ll run an Avalon VT-737 pre into a BSS DPR-901. On a good analog console – a Midas XL4 or Yamaha PM4000 – I’ll run an Empirical Labs Distressor into the 901.” 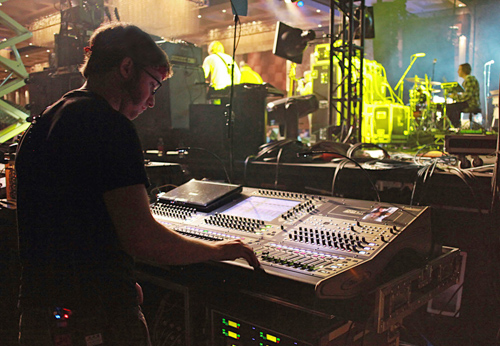 The choice of mics and the engineers’ approach to keeping them from becoming casualties of the band’s stage mayhem is lean, clean and detailed. Inside drummer Jared Champion’s kick is a Shure Beta 91A, which Rigby praises for its built-in preamp and lack of additional cables and adaptors. Outside, a Beta 52 is mounted with a custom-built clamp.

“We’re not fans of mic stands,” Rigby states, and with the exception of vocals, clamps and claws are used exclusively to position instrument mics. “It started with the kick. Matt would jump on the riser and end up kicking the 52’s mic stand.” As a fix, they took inspiration from another band’s engineer. “He’d use a Gibraltar drum mount clamped onto the leg of the kick. It curves perfectly around the drum. Then you just cut a mic stand up, take a short piece and clamp that on. No matter what, it never moves.”