“When I get older, this is a place I’d like to be,” says Noel Gregos, president of Metro Technical Services, the Laurel, MD AV systems integrator that was called in to help Hebrew Home of Greater Washington, a skilled nursing center, deal with a speech-intelligibility problem for teleconferencing in its executive boardroom.

Gregos’ admiration of the facility, part of Charles E. Smith Life Communities, is widely shared: Hebrew Home of Greater Washington was designated a 2017-18 Best Nursing Home by U.S. News & World Report; it earned a Five-Star Overall Quality Rating from the Centers for Medicare and Medicaid Services; and is a recipient of the 2017 Bronze Commitment to Quality Award from the American Health Care Association.

“It’s a hexagonal-shaped room with glass windows and glass display cases, and an oddly shaped, hard-surfaced ceiling that swoops up to a skylight,” Gregos explains. “It’s the kind of room that generates tons of reflections but that also has nowhere to mount ceiling speakers. To say it was a challenge is an understatement.”

The solution was focused sound, and Bose Professional had the tools to achieve it. Wall-mounted Bose Panaray MA12EX modular line array loudspeakers feature Bose Articulated Array loudspeaker configuration, which provides focused sound over a wide area and also reduces the number of speakers needed; in this case, the entire room is consistently covered with just two of the MA12EX arrays, powered by a Bose PowerShare PS602 adaptable power amplifier. Then, the Bose ControlSpace EX-1280C conferencing processor works with the six Shure table microphones, also installed by Metro Technical Services, to assure that same focus on the input to the system.

The ControlSpace EX-1280C processor offers features such as 12 acoustic echo cancelers and automixing that keeps the focus on the people speaking at all times, as well as 64×64 Dante networking and a flexible, open architecture signal processing to meet the needs of a wide variety of integrated-microphone audio conferencing applications. As important, the ControlSpace EX-1280C processor and the ControlSpace Remote app simplifies operation of the system by boardroom users, with much of the operational layout handled by Metro Technical Services using ControlSpace Designer software and its drag-and-drop programming to create limitless design possibilities that can be simply and intuitively accessed through the remote.

“It’s an excellent solution for what had been a complicated and challenging room, acoustically speaking, but one that can be operated by anyone through a very simple user interface,” says Gregos.

Ed Van Coutren, vice president of Campus Services for Charles E. Smith Life Communities, agrees: “This was a challenging space for sound, but we were confident in Noel’s recommendation of the Bose solution. Bose .is known for quality sound and has not only improved the audio, but it also simplified how the system operates. Having a system that manages multiple people speaking at the same time has transformed conferences in our boardroom.”

“The differences in the room, in terms of both how it sounds and what it takes to use it, are a quantum leap from what they had before,” adds Gregos. “Bose technology made all the difference.” 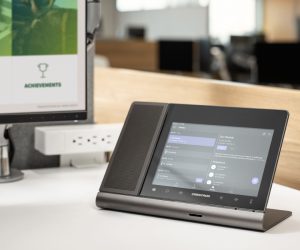