Miller has mixed for Diamond for the last 49 years, and incredibly, has never missed a show. A longtime and loyal customer of JBL Professional, he’s relied on JBL audio systems for Diamond’s tours for many years, and was one of the early adopters of JBL VerTec. For this tour, he selected JBL’s VTX V25 arrays.

“I think the sound for this tour is the best we’ve ever had,” Miller say. “We have better control over the system, and we have better technology than in the past. We have better consistency from venue to venue, whether it’s indoors or outdoors. And with the Crown amplifiers we’re carrying, we have gobs of horsepower to run everything, but we never blow loudspeakers. Our show runs somewhere around 100 dB max, or maybe 101 or 102. We don’t want to overpower people.” 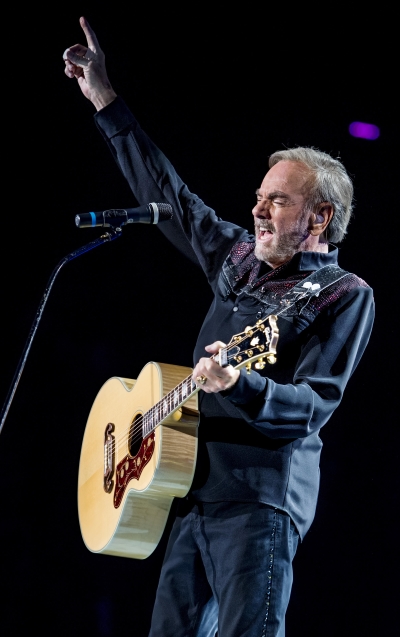 “With a performer like Neil Diamond, you need a sound reinforcement system that delivers his voice with maximum authenticity and intimacy,” says Dave Shadoan, president of Sound Image. “Because the VTX V25 system provides such precise reproduction, it was the perfect choice for this tour.”

“We have the VTX V25-II loudspeakers on the main system out front, and then the VTX V20s are around the sides,” Miller says. “Sometimes we play in the round, so we carry enough gear to cover all the way around the back of the stage. As far as the subs, we hang them. We used to have them on the floor, but we had so many complaints from audience people who were too close to them, and from the vibrations rattling the stage, that we put them up in the air.”

The strategy Miller employs for mixing Diamond’s shows boils down to one fundamental concept—make sure the lead vocals are intelligible at all times. The clarity of the VTX V25 system is key in that regard, as is the accurate reproduction of the AKG D5 vocal mic.

“People don’t come to hear the band they come to hear Neil,” Miller says. “We have a big band and they’re outstanding musicians, but they don’t overpower the vocals. There is never a time that you can’t hear Neil clearly and distinctly at every seat in the house. Our goal is to try to transcend from the stage and across to the audience—to make it sound as authentic as possible. The JBL, Crown and AKG gear helps us greatly in that regard.”