Respected engineer and producer shares techniques and strategies for successful studio sessions learned and developed over an extensive career in new book.

For nearly eight star-studded decades, Al Schmitt has been recording, producing, and engineering music for the greatest talents our industry has to offer. Al Schmitt on Vocal and Instrumental Recording Techniques is your chance to learn from a respected engineer and producer.

In Al Schmitt on Vocal and Instrumental Recording Techniques, you’ll join Schmitt in the studio as he walks you through his miking process, helps you select proper equipment, and guides you to capture only the best sounds. You’ll learn to consider variables such as song style, instrumentation, and the recording space itself when selecting and placing a microphone; you’ll also watch him demonstrate his favorite techniques and setups for a number of instruments including drums, bass, piano, guitars (both acoustic and electric), organs, and horns as played across many genres of music. 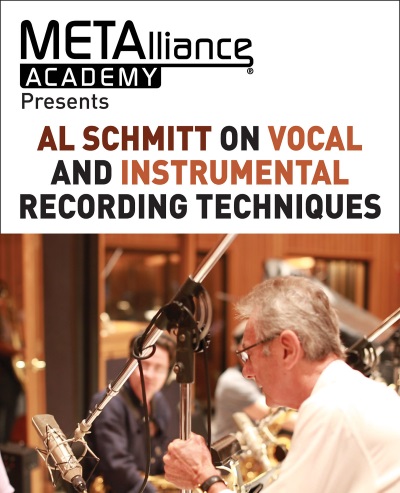 Beyond equipment and tactics, Schmitt draws on stories from his illustrious career as he explains the importance of skillfully interacting with musicians. He highlights the value of catering to an artist’s vision and preferences in order to create a session that is both comfortable and effective for all involved.

Al Schmitt has been in recording studios since he was seven years old, starting in his uncle’s recording studio in New York City. At nineteen, after serving in the US Navy, Schmitt got his first engineering job at Apex studio in New York working with his mentor, engineer Tommy Dowd. He was responsible for recording simple demos, but that changed when a presumed demo booked under the name “Mercer” turned out to be Duke Ellington and his band. Schmitt went on to record sessions for Atlantic Records, Prestige Records, and Bobby Shad’s “Sittin In” Records.

Schmitt loves producing and engineering and has been privileged to work with the best and the brightest in the recording industry, including Frank Sinatra, Barbra Streisand, Neil Young, Bob Dylan, Usher and Dr. Dre, to name a few. During his career, he has recorded and mixed over 150 gold and platinum records and has gone on to receive a total of 20 GRAMMY wins and 2 Latin Grammy awards for engineering albums by such artists as Steely Dan, Toto, Natalie Cole, Quincy Jones, Diana Krall, Luis Miguel, Ray Charles, Chick Corea, DeeDee Bridgewater, and, finally, Paul McCartney in 2013 (his most recent Grammy win)