Moving into an acoustical mode of thought

Take a free lesson in a SynAudCon web-based training course

Loudspeakers for professional audio run the gamut from inexpensive plastic enclosures to large, complex, and very expensive line arrays – plus plenty of formats in between such as columnar line arrays and high fidelity ceiling loudspeakers.

In chapter 1 of this series, we discussed the importance of comprehensively understanding the needs of the client before planning a system.

Now let’s look at the suitability factor of one type of loudspeaker format versus another. Note that this requires an acoustical mode of thought.

Large reverberant spaces are very difficult to tame. Line arrays can significantly minimize SPL differences from the front to the rear of the audience area because they have the ability to “throw” further than point-source loudspeakers.

The narrow (or adjustable) vertical dispersion pattern of most line arrays minimizes spillage onto ceilings and floors where it’s not needed, instead concentrating the energy towards the rear of the room. This property provides a degree of coherency not available from most point source speakers, and the initial arrival of the wavefront is usually very intelligible. But high coherency also comes with a potential downside. 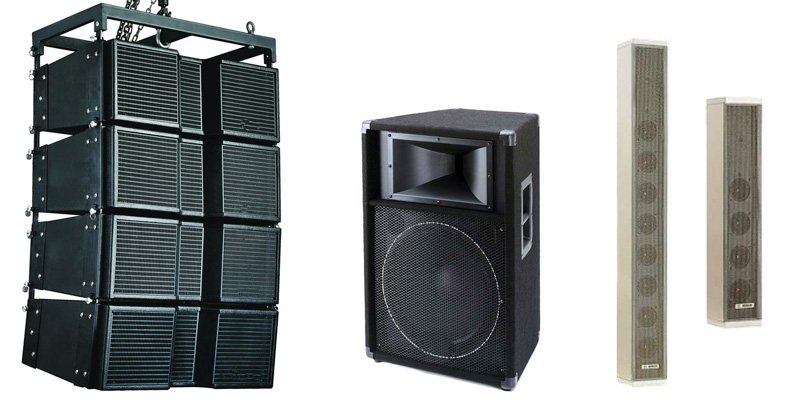 A line array is much more likely to produce a powerful, coherent reflection off the rear wall unless the wall was designed to be acoustically absorbent, or is temporarily covered with heavy theatrical draping.

Instead of the reverb-like random reflections generated by a point source rig, the coherency of the reflection from a line array can sound like a digital delay has been added to the system. This can wreak havoc with the performers on stage who will hear the reflections as much as a half second late in a large room, and is especially bad for live recordings and television broadcasts.

The intensity and nature of the reflections will be governed, to a degree, by how high the line array rig is flown and its coverage angle. It’s often better to focus the rig so that it’s not covering the rearmost seating areas, perhaps avoiding as many as ten rows in a large room.

Doing so will minimize the reflections from the rear wall, but then those seats will need to be covered with local delay loudspeakers, which may not be practical for a “one-off” (single) event due to the added workload.

Draping may still be needed even if the line array rig is not focused directly at the rear wall. While a single drape will help, two (or more) layers of drape, spaced about 3 feet apart, will clean up the reflections considerably, budget permitting.

Figure 1: An exploded cluster can be a good solution, particularly if the loudspeakers exhibit excessive interference in a tight-pack array format. (click to enlarge)

Conversely, small, acoustically dry spaces are often better served by point-source loudspeakers that take up less space and cost less than line array rigs. Of course every church, theatre, club, and ballroom seems to demand a line array system these days, but that doesn’t mean it’s the best choice.

Low-ceilinged rooms can be particularly challenging for line arrays because they can’t be suspended high enough to optimize their coverage angle. A cluster of point-source loudspeakers—or an exploded cluster (Figure 1)—are likely to perform better.

Over the course of more than four decades, the late Ken DeLoria tuned hundreds of sound systems, and as the founder of Apogee Sound, he developed the TEC Award-winning AE-9 loudspeaker.
All Posts
Top Stories
Explore All Study Hall