While Brunclik’s ability to adapt has been a key driver in Clearwing’s growth, he also credits his staff for their efforts.

Some of them are family, including niece Courtney Brunclik, who, along with Phoenix general manager, Dave Temby, has been instrumental in the overhaul and update of the company’s website in early 2012.

His son Bryan, now VP of sales, has also discovered a passion for the production business, but being family doesn’t win anyone special treatment, Brunclik says, laughing again. “I made Bryan start by polishing feeder cable.”

Today, Clearwing Productions occupies a 40,000-square-foot warehouse in Milwaukee and a 20,000-square-foot warehouse in Phoenix, staffed by about 50 full-time employees. While sound and lighting are still the largest percentage of the business – followed by backline – the expansion of their video inventory has become increasingly important for servicing the needs of corporate clients and special events.

And in order to expand the reach overseas, Clearwing has recently joined the AV Alliance, a worldwide consortium of production companies focused on enhancing each individual member’s ability to provide production for events anywhere in the world with the same degree of continuity, technical precision and service as they would in major markets in the U.S. and EU. 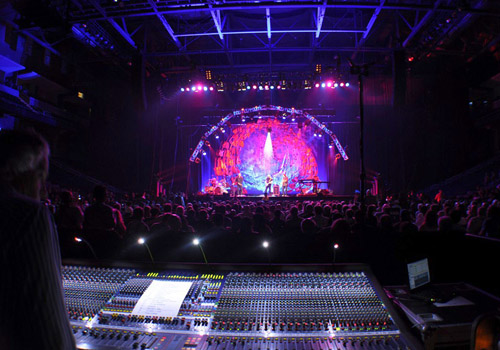 Brunclik has also prospered in more personal ways, by building the life he’d envisioned when he got off the road. “Family and faith and a variety of other things are important to being a well-rounded person,” he says, “and my biggest pride and joy are my nine children. My oldest is 34 and my youngest is five.”

He remains keenly interested in the technological evolution of production technology as well as the cultural evolution of music. “I’m into Electronica now for some reason; Tiesto, Armin Van Buuren and all those DJ cats.”

It’s been years, however, since he’s manned a console himself. “I still have a strong passion for music, so it is a little bit heartbreaking, but I love what we do because it’s still about building something. One of the greatest thrills for me is to go to a festival we’re involved with and see a stellar finished product. I really get my strokes when I can stand out in front of an awesome looking and sounding show, and know that we provided everything from the sod up.”