At the time, the company had adopted the name Clearwing Audio, Brunclik says, and had just one arena system comprised of proprietary loudspeaker boxes built and developed with Mark Gander, later of JBL Professional.

“It was a groundstacked system called an LRC – double 18s, double 12s, a 2” compression driver and two bullets in each box. My dad co-signed a loan for $70,000 to build it and we were off and running.”

Brunclik toured relentlessly, once spending 200 consecutive days on the road, but eventually the life took a toll on him and his marriage, prompting him to head home with an eye toward building a regional company from scratch.

“I never took to the tour bus life; it just wasn’t the right chemistry for me, and I wanted to see my kids grow up.”

For three years, he operated Clearwing as a one-person shop out of a 2,000-square-foot warehouse. By 1985, he’d bought his previous partner out, incorporated, hired additional staff and moved into a 5,000-square-foot facility. He’d also taken steps to get his personal life back on track. “I got clean and sober in 1985, started my climb and I’ve never looked back.”

Over the next few years, Clearwing consistently upped the ante in terms of the equipment and services it offered. Traditionally, a large percentage of the business was supplying audio for clubs, but as the years went by, the company took on a larger chunk of the thriving regional summer festival scene, including Summerfest. Initially tapped to provide production for only one stage, now the company serves the entire festival’s needs, roughly 14 stages in all. 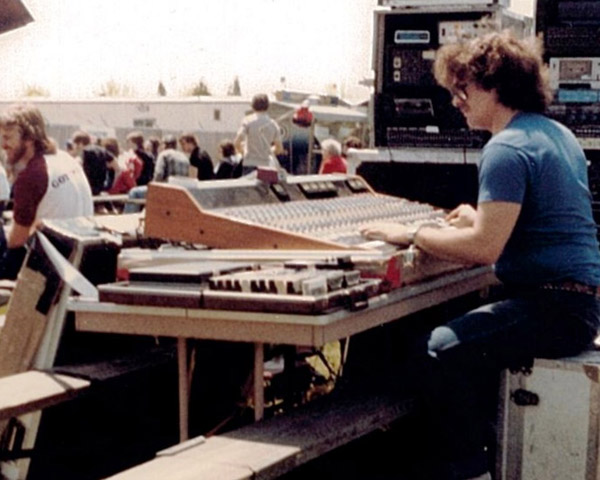 Sometimes expansion required “going out on the thin branches,” Brunclik notes. “I borrowed money, paid it back, borrowed again, paid it back, and we re-evaluated our model several times to look at the return time on our investment.” Though it may have been risky at times, it was necessary, not only to make the most of every opportunity that came along, but to do so at the right moment.

Perhaps no opportunity helped spur growth more dramatically than one he seized during a visit to Sunbelt Phoenix Studios while vacationing in Arizona in the 1990s. “I had this habit of opening up the phone book and seeing who the players were in other markets, so while I was there we went over, knocked on Sunbelt’s door and got to talking. They primarily did staging and lighting, and we supplied audio and a bit of lighting. 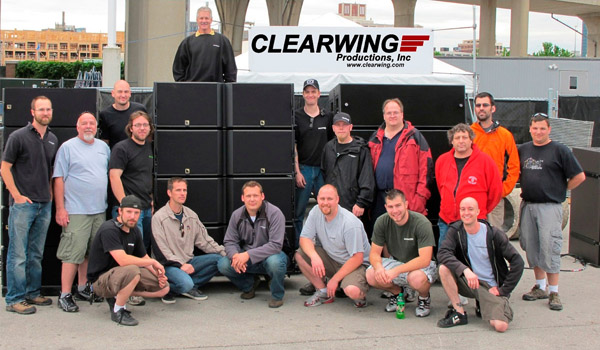 The Clearwing crew preparing to fly its L-Acoustics K1 arrays at Summerfest in Milwaukee in 2010. (click to enlarge)

“We also realized our busy seasons happened at inverse times of the year. So we developed something we called the ‘NAFTA of production’ – in the winter, I’d send audio gear to them and in the summer, they’d send me a roof and lighting.”

The goal was to help each other expand into new market segments using their partner’s inventory. Although the partnership lasted over a decade, ultimately Sunbelt folded in 2003 owing to an internal dispute. Around the same time, another provider, Masque Sound, closed its Phoenix office, leaving a hole in the market Clearwing could fill without Brunclik stepping on the toes of any friends and former business partners.

The company has diversified even further in recent years, offering event-planning services as well as full production. Additionally, both the Milwaukee and Phoenix locations now have “pro shops” providing everything from gaffers tape to lighting gels and gloves to clients.

An installation division to service corporate clients has also taken on a number of high profile projects, including Cowboys Stadium in Dallas in 2008. Also in the portfolio is Big Event Specialists, a separate trucking company that provides system transportation services.