“Ever since I drove my first drywall screw into my mother’s coffee table, I’ve had a passion for building things,” says Gregg Brunclik.

Originally that manifested itself as a desire to build things with his hands, he adds, including the first loudspeakers his company, Clearwing Productions, offered to its clients.

While that passion has evolved over time, it’s been integral to success of Clearwing since day one, and well before the company incorporated in 1985.

Over time, the Milwaukee-based company has grown from a small audio company to a one-stop shop capable of fulfilling virtually any event or venue’s production needs – lighting, sound, backline, staging and video, portable power, transportation, and full design/install services.

The customer base is just as diverse, and includes corporate and house of worship clients, touring acts, and large-scale multi-stage events such as Milwaukee’s legendary Summerfest.

One of the most important factors in that growth is Brunclik’s willingness to turn on a dime to seize an opportunity, even it if means growing in multiple directions simultaneously. “At one time, some people made sport of our business by calling us ‘Clearly Winging It,’ and we have blown in the wind a little bit,” he admits, “but we’ve gone where opportunities are – if a reasonable return on your investment is possible, it doesn’t really matter what market segment it’s in.”

At the outset, the focus was on meeting the evolving needs of the Milwaukee regional market rather than conforming to a rigid business plan in the hopes the market would embrace it. “I started as a sound guy in a garage with a tiny system,” he explains. “I didn’t have wealth to invest in a lot of gear immediately and maybe it took a longer time for us to grow than some, but because we live in a such a huge festival city, our market drove us to expand.”

Brunclik laughs often, displaying a ready sense of humor that’s clearly reflected in the company’s culture. His own bio on the company website describes him as president/CEO, loan signer, and feeder schlepper. 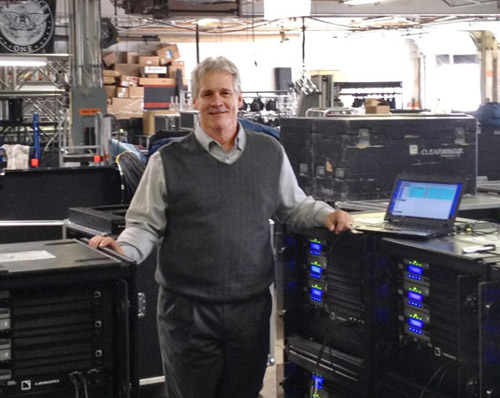 “I put the last part in there for a reason,” he notes. “The only way to build a team is to be part of it. If I go to a show and people need a hand loading out, I’ll dive in. The best way to inspire people to do whatever it takes to get a job done well is to show them I’m willing to do that myself.”

Born in Sturgeon Bay, WI, he grew up in Madison before attending high school in Milwaukee. During high school, his ability to adapt asserted itself during his first gig in the entertainment business. “I was very enamored with music when The Beatles broke in the U.S. and I played drums in high school, but the first band I joined already had a drummer, so I played keyboards.” In 1968, when the band morphed into a country act and replaced him with a pedal steel player, he adapted again and took on running front of house sound.

Brunclik did a brief stint at the Milwaukee Area Technical College electronics program, but built up his engineering chops on the job. By the time that first band broke up, he had acquired a small inventory of gear, enough that he and another local engineer could pool their collective resources and take on local one-off club gigs.

Read More
A Minimalist Approach: Effectively Using Just One Effect In The Mix

One of those gigs was doing sound for country singer Eddie Rabbit, whose career was just taking off at the time. Rabbit was so impressed he took them on long term. “He asked if we could be in northern Oklahoma in three days, and we toured with him for the next five years.” Soon after, they picked up a tour with Blackfoot, where the support act, Def Leppard, was just undertaking its first U.S. tour.