Large or small, the Kill the Lights Tour makes it all work, and work well.

No matter how much dust Luke Bryan’s current Kill the Lights Tour kicks up, the party and the good times just keep rolling.

With seemingly no venue deemed off-limits on his schedule, the two-time CMA and ACM Entertainer of the Year is on the road with a backdrop of dates recently played or soon to come at festivals, in arenas, sheds, stadiums, fieldhouses, and even the wide open spaces of farm fields, where his annual Farm Tour returns him to his rural roots.

“It’s extremely important to Luke that he reaches out to his fan base wherever they may be,” says Pete Healey, Bryan’s front of house engineer, production manager, and co-designer of the show itself. “That’s what pretty much takes us everywhere. This season we’ll drop into sheds, then have two nights back-to-back in July at Gillette Stadium outside of Boston right before Guns ‘n’ Roses plays there.

“In August we’ll be up in Minneapolis on the 19th at U.S. Bank Stadium the night before Metallica,” he continues. “On the 27th we’ll be in Chicago at Wrigley Field. If there’s one overriding challenge on this tour, it’s dealing with the dramatically different nature of the venues we play, large and small.”

To accommodate the varied system configurations of all the stops on the tour, a core package of show gear was created that can be plugged into a 70,000-seat stadium one night, then compressed to squeeze into a facility like Bozeman, Montana’s Brick Breeden Field House the next. All of this is made possible in no small part by Clair Global, which provided a PA based around its new flagship Cohesion CO-12 line arrays. 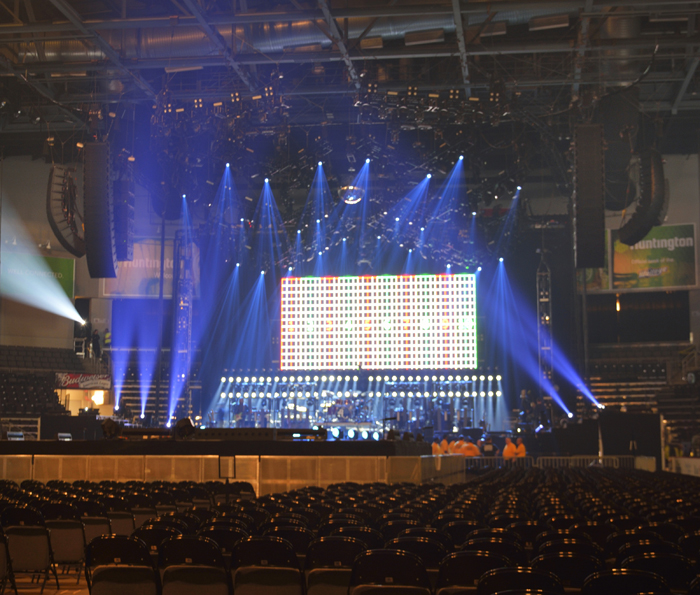 A perspective of the production, including Clair arrays flying left and right, prior to show time on the current tour.

With power and processing coming from Clair’s proprietary StakRak and Clair/Lake components, the rig is typically deployed in arenas with main hangs comprising 12 to 14 CO-12 enclosures per side, six subs per side flown behind the PA in cardioid hangs, a dozen more CO-12s in each of two sidehangs, and upstage rear hangs using six to eight of Clair’s i-DL boxes per side. To buttress the low end, six more subs are deployed on the ground.

“In arenas and stadiums we’ll sell seats to 270 degrees,” Healey explains, “so our area of coverage wraps around the side of the stage to some degree. To the best of my knowledge, we’re one of the first tours, if not the first tour, to use a CO-12 system in this way. Carrie Underwood was one of the first to use one in the round.” 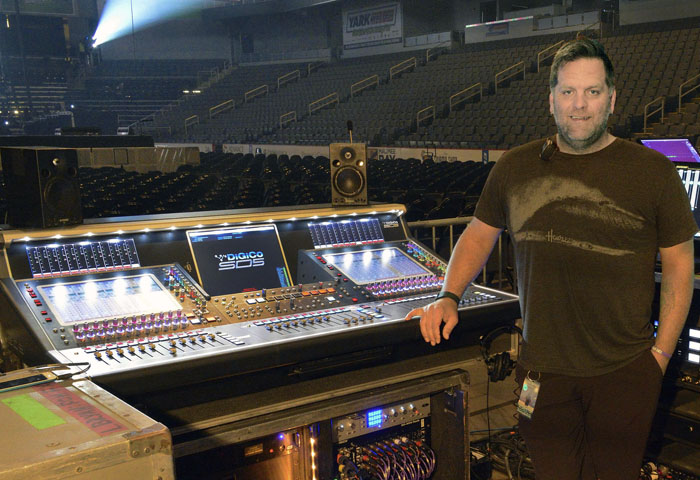 Joining Healey on the Kill the Lights Tour is monitor engineer Ed Janiszewski, and with Clair’s Frank Sgambellone currently on the mend after suffering an injury earlier this year, Jim Ragus is taking over as crew chief/system engineer until Sgambellone’s anticipated return later this summer. Hope Stuemke and Brent Edgerton serve as house PA techs right and left, respectively, while monitor tech Dustin Ponscheck does double-duty as the tour’s RF wrangler.

Plentiful Wireless
The show relies heavily on wireless components. At the monitor position there’s a 17-space rack jam-packed with RF devices. On stage, a pair of 10-space racks contain yet more cord-cutting technology, all of which is networked to provide a total of more than 50 wireless channels.

“In a world where it seems like the frequency spectrum available for wireless use is always shrinking, RF can rightly be viewed as a problem,” Healey notes. “But for someone who has experience and knows what they’re doing, there’s always a work-around. I mean, we go to these awards shows held right in the middle of New York and Los Angeles ‘RF hell’ and have a couple hundred wireless channels all going at once. It gets done.”

A view of one side of the flying Clair array set and subs from the front, helping to provide 270-degree coverage.

Wireless systems, as well as all microphones for that matter, are from Shure. The company’s Axient system takes the spotlight at Luke Bryan’s front-and-center position, where the wireless network captures the frontman’s vocals with the aid of an SM58-equipped transmitter.

“This isn’t a country show where everyone remains seated tapping their feet,” Healey says. “It’s loud and dynamic. Luke spends 90 percent of his time in front of the entire PA on a large thrust stage, so I need something with serious rejection I can count on. There’s nothing else like an SM58 in these kinds of situations.” 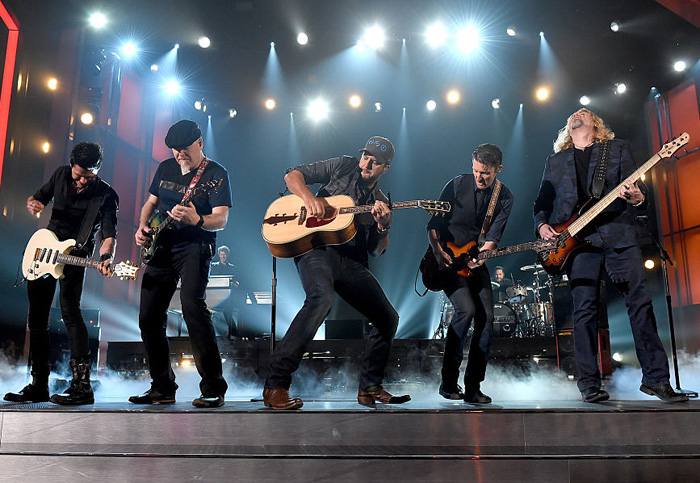 Bryan and his band performing on the current tour, all outfitted with IEMs. (Getty Images)

Shure UHF-R systems (UR4D receivers) handle the rest of the wireless needs onstage ranging from instruments to backing vocals. Guitars are all miked at their cabinets with a combination of SM57s and SM27s; banjo and fiddle rely upon an assortment of J48 active and JDI passive direct boxes from Radial Engineering.

A BETA 52 may be a more common choice for a bass cabinet, but on this tour a BETA 98A is the choice, with the logic for its selection being that if it works well with toms it must have the low-end capacity for a bass cabinet. In this case, the crew found it does, and it also makes the logistics of getting the cabinet on and off the stage that much easier.

Microphone Notions
Talkback mics are not an uncommon sight on a country stage, and this one is no exception. Taking a different approach to the matter this time out,

Healey and his colleagues picked Shure model 55SH microphones for the job, a choice that imbues the stage with a classic stand-mounted look and brings an air of fun to a normally quotidian miking task.

Drummer Kent Slucher’s Ludwig kit is mounted on a five-foot riser that, with only minor disassembly, can be rolled onto the truck as-is at the end of the night. Subscribing to the notion that drums should never be over-processed, Healey takes a mindful approach to managing Slucher’s sound, using close-miking techniques starting at kick with a condenser BETA 91A and BETA 52 mounted with a Kelly SHU shock mount system.

Snare is captured with a combination of an SM57 on top and a KSM137 on the bottom; the first tom – a 12-inch – is miked with a BETA 98AMP, all others use SM27s. KSM137s are the choice for underheads as well as rides.