Recently profiled in the New York Times as part a larger story about the emerging arts and cultural scene in Brooklyn’s Gowanus neighborhood, Public Records is described by co-owner Francis Harris as “a hospitality establishment with exceptional curated music and live performances.”

Public Records has an all-day vegan café with a carefully selected periodical magazine selection along with a limited vinyl record collection on consignment from different labels and friends of the venue. It also has a bar/restaurant with alcohol by volume cocktails and non-alcoholic offerings made with fresh ingredients. Very conscious of the space’s environmental impact, it is a plastic-free venue with keg natural wines to save on glass bottle consumption and the fuel used for shipping them.

As Harris underscores, “We’re ethos driven and hope to create a day to night eco-system that people can experience differently depending on the time of day. We’re trying to take a more health-oriented and mature approach that allows people to enjoy music outside of their homes.”

To create the sound system to support this unique concept, Ojeda explains, “We’d been in extensive discussions with the owners who were looking for a true 2-channel audiophile system on steroids with amazing sound staging and imaging and enough horse power to cover a full on nightclub. We decided to build a system using the theory of older components and designs like Altec Lansing but updating those components with modern drivers, amplifiers and signal processing.

“In the main sound room, we installed a four cornered stack system, each consisting of two Void Acoustics Nexus XL subwoofers, one custom Ojas Quad 15 slot-loaded enclosure, one Altec 1505B Multi-Cell horn and one FaitalPRO super-tweeter. The amplification for the main room is a Void Bias V9, Void Bias Q2 and a Void Bias D1 with a pair of BGW VXi3.3 amps and BSS signal processing. 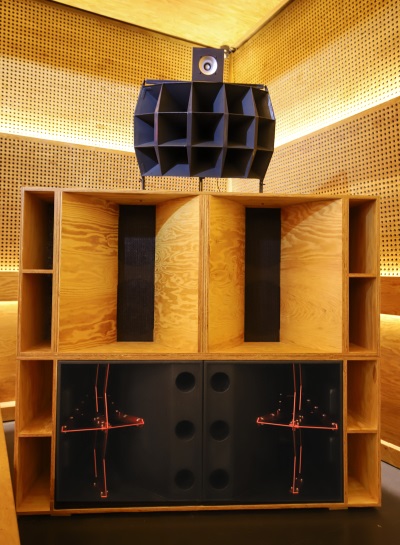 “In the Bar Room, we have four corner stacks, two with replica Altec 816 midbass  boxes built by Devon and four with a Void Acoustics Venu 115 subwoofer and four Ojas cabinets with a 500hz horn and Altec HF driver, all  powered by a Crown Macrotech 5002, a BGW 750G and a BGW 100B with analog crossovers and EQ. For the outside area, there’s one Ashley signal processor with six Void Acoustics Cyclone 55 speakers.

Asked about the results, Ojeda says, “The dynamic headroom is through the roof and the amps will never get close to their limit because the system is so overbuilt. The channel separation and imaging is so incredible that we played the live version of ‘Hotel California,’ and it sounded like you were standing in the audience during the concert. It really is completely crazy, more than I could have imagined in large part because of the amplifiers. The BGW’s are class A-B, extremely fast with an outstanding slew rate and channel separation unlike any commercial amplifier on the market.

“The owners are completely ecstatic with the system and in all my years of doing this, I have to say it’s really a special sound system, something that hasn’t happened in the last 20 years in NYC. It’s a special room which has been acoustically treated, but it has real life to it.”

Public Records will be presenting unique performance artists such as Damo Suzuki, a Japanese musician known for his singing with CAN, ambient-music artist Laraaji and minimalist techno artist Jan Jelinek.

In addition, Harris adds, “At night, we have various lecturers coming who present their record collections in an all analog system. We want to take the preciousness out of the audiophile world and make it more community driven and democratic. Like there are plenty of people who aren’t DJs sitting on great record collection that no one gets to hear outside of their houses. So the romantic idea is that they can come in, bring their friends and listen to their records on our HiFi.

“I knew Jason for the sound systems he’s built in New York and his work with DJs like Louie Vega and Victor Calderone, and Devon’s speakers are like audiophile Altec-Lansing that wouldn’t necessarily work with a commercial system.

“So it was like an experiment to combine this HiFi listening system with the power of this amp rack that Jason would design combined with subs and bringing those two systems together make it a very unique experience and a perfect balance of what we were seeking for the venue itself. We wanted to build a sound room so that when you played a record that’s really well produced with an incredible stereo field and remarkable musical depth, the system would do those records justice.”

Four veteran sound engineers to highlight the importance of paying attention to and understanding every component in a sound system signal chain.