MixOne Sound in Southern California is no stranger to the dBTechnologies VIO system. After one year of using the system in partnership with Hudson Audio Works, owner Spenser Bishop says that he won’t mix on anything else.

When Live Nation asked for MixOne and Hudson Audio to support the annual Freedom Benefit Concert featuring the Gin Blossoms on the USS Midway, VIO was the go-to choice for the team.

“I chose VIO last year because I was able to push it to the limit without hearing limiters and compression,” says Bishop, “You know it’s there to protect the PA, but overall it sounds like, and has the power of a passive box, but with a huge output. For this show, we’re using the Flexsys 10s, VIO L210s and VIO S3118s, as well as LVX XM15s and LVX XM12s for all of the wedges.” 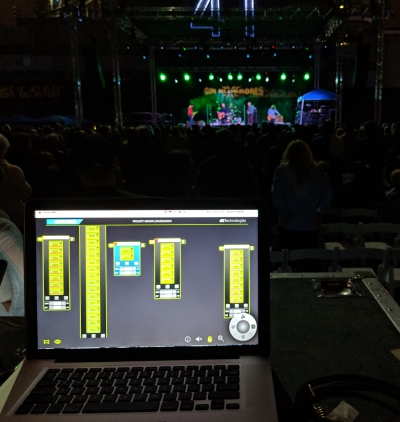 The stage was fully equipped with dBTechnologies, and at front of house, Bishop was able to utilize the new beta Aurora Net software to monitor and control the boxes in real time.

Since during the day the USS Midway operates as a museum in the port of San Diego, and there were ceremonies on deck before the show commemorating the holiday, the short time allocated left little room for error. With VIO, though, setup was a breeze.

“My favorite thing about VIO has to be the convenience,” said Clay, a member of Spenser’s team. “From the carts, they come into the process of flying them, it takes less than thirty minutes to put a whole array up. For us workers who have to push a lot of the gear around, VIO is amazing.”

While wind gusts and cool air were prevalent throughout the day, nature was on the team’s side as the show started precisely at sunset. When asked about how he thought VIO performed on the show, Ryan Garvey, front of house engineer for the Gin Blossoms summed it up in one word – outstanding.

“For me, it’s easy to make a box sound good as far as frequency response, but what isn’t easy is to make the transients come through at the same time as long envelope sounds. What’s really key is getting a nice punchy tone out of the kick and snare at the same time as a guitar solo. The system was very clear, very punchy, and it sounded great.”