Ghost In The Machine: Phantom Power

Clearing up the mysteries about phantom power -- what exactly is it, and how do we apply it effectively?

If a condenser mic doesn’t work due to a low phantom voltage after the mic is plugged in, try one of these suggestions:

• Plug the mic into a well-regulated stand-alone supply, and connect it to a mixer mic input with phantom turned off in that channel.

• Use a mic with less current drain or with lower phantom voltage requirements.

Phantom power supplies should be rated in the total number of milliamps they can supply, but few manufacturers offer that spec. Make sure that the total current drain of all the mics in use doesn’t exceed the supply’s current rating (if available).

It’s also a good idea to avoid having phantom power in a patch bay because someone is likely to patch in and cause a pop. If you must patch into a jack with phantom on it, mute the input module that the mic is connected to. (Mic-level patches should be avoided anyway.)

Some phantom supplies cause a hum when plugged into an XLR connector that ties the shell to ground. Float the shell. This also helps to prevent accidental ground loops. Since the cable shield carries the DC return, be sure the shield and its solder connections are secure. Otherwise expect crackling noises – especially when the cable is moved.

Some mics work either on internal batteries or external phantom power. In most designs, connecting the mic to phantom automatically removes the battery from the circuit. Otherwise the battery would severely load down the phantom supply. If this appears to be happening, remove the battery or turn off phantom in the mic’s channel. 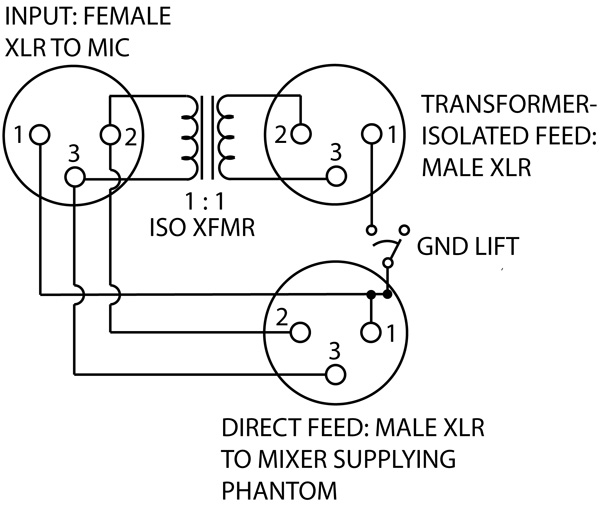 Employing Splitters
Applying phantom power correctly is important when you use a mic splitter, which sends a mic signal to two or more destinations; for example, to a FOH console, monitor console, and recording mixer. A simple splitter is a Y-cable, while more elaborate splitters are transformer isolated. Inside the splitter, the input XLR is wired to a 1:1 transformer (Figure 4).

The splitter in Figure 4 has two feeds or outputs: one direct and one isolated. Wired directly to the mic input connector, the direct XLR output connects to the mixer that supplies phantom power. Only one mixer should be the phantom source.

The transformer-isolated XLR output connects to another mixer. Since the transformer electrically isolates the two mixers, phantom power from one mixer can’t get into the other mixer. Neither can any radio frequency interference (RFI). Ground-lift switches in the splitter are used to prevent ground loops between two or more mixers.

It’s essential to set up phantom power correctly when using a splitter. Decide which console you want to supply phantom power (usually FOH). Connect the splitter’s direct outputs to that mixer’s snake.

Splitters have a ground-lift switch on each output channel. This switch connects or disconnects (floats) the cable shield from pin 1 of the XLR connector. When the ground-lift switches are set correctly, you should get no ground loops and their resulting hum.

1) Turn off phantom power in each mixer, and turn down all faders.

2) Make sure the direct feed’s ground-lift switches (if any) are set to ground, not lift. Otherwise phantom power won’t work.

3) Go to the mixer connected to the direct feed. Turn on the mixer, switch on phantom power, and bring up each fader to listen for a signal.

4) On the splitter, find the ground-lift switches for the other mixer’s feed. Set them to the position where you monitor the least hum and buzz at the other mixer.

5) Repeat step 4 for any additional mixers. 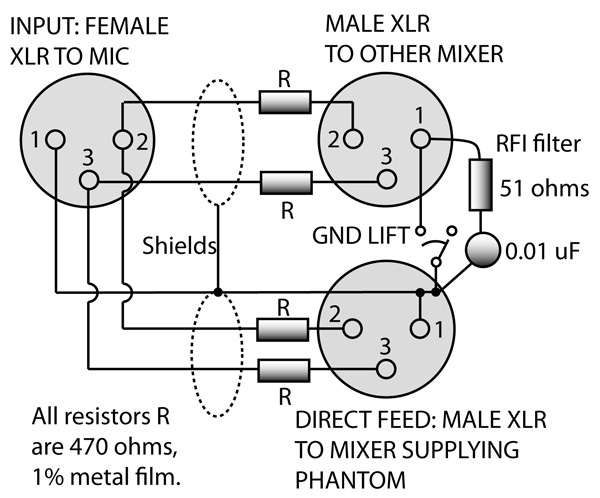 To save money, some use Y-splitters (Figure 5) instead of transformer-isolated splitters. The resistors shown in Figure 5 prevent mic loading and improve isolation, while the ground lifts prevent ground loops and block phantom power. Some engineers prefer to omit the resistors. Unlike a transformer splitter, a Y-splitter does not block RFI.

DC Bias
Some mics or capsules work on “DC bias” or “plug-in power” rather than phantom power. Suppose the mic capsule has a built-in FET source follower with three terminals: audio, power and ground. In this case, a separate wire supplies a DC voltage to the mic capsule (Figure 6).

Figure 6: Plug-in power for a mic capsule with 3 terminals. (click to enlarge)

Electret mic capsules can be powered directly by DC bias from a 1/8-inch phone jack. On the tip and ring, +3 to +5 volts is supplied, while the sleeve is the supply ground. This 2-wire powering arrangement is used in many portable recorders and computer sound cards.

Figure 7: Plug-in power for a mic capsule with 2 terminals. (click to enlarge)

The DC power is fed typically through a 2.2K resistor, and a capacitor blocks the DC from the mic preamp input (Figure 7).

There’s a lot to know about phantom power. If you’re unsure about it’s use and application, keep this article handy, and also check out other articles on the topic in Microphone World here on PSW.