Getting That Tonal Balance: What EQ Can Do For A System & Mix

Looking at the usefulness and importance of equalizers

You may have heard it said that equalizers are nothing more than glorified tone controls. That’s pretty accurate and helps explain their usefulness and importance.

Simply put, equalizers allow you to change the tonal balance of whatever you are controlling. You can increase (boost) or decrease (cut) on a band-by-band basis just the desired frequencies.

There are graphic models with slide controls (sliders) that roughly “graph” the equalizer’s frequency response by the shape they form, and there are parametric models where you choose the frequency, amplitude, and bandwidth desired – the filter parameters – for each band provided.

Far and away, the simplest and most popular are the 1/3- and 2/3-octave graphics. They offer the best combination of control, complexity and cost.

OH, BEHAVE!
In selecting graphic equalizers, the primary features to consider are the number of input/output channels, the number of boost/cut bands, the center-frequency spacing of each, and the bandwidth behavior. 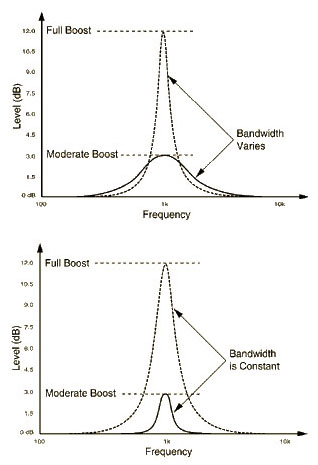 The anatomy of variable-Q (top) and constant-Q curves. (click to enlarge)

This last one may at first seem a bit odd, but it is perhaps the most important characteristic. Bandwidth behavior is either constant-Q or variable-Q. The quality factor, or Q, of a circuit relates to its bandwidth in an inverse manner. That is, narrow bandwidths result from high-Q circuits and wide bandwidths come from low-Q circuits.

Variable-Q designs have varying bandwidths (the shape changes) as a function of boost/cut amount. They start out very narrow for small amplitude changes and become quite wide for large changes. The constant-Q design maintains the Q regardless of the amount of boost or cut to the filter.

By contrast, in the early `80s, Rane developed the constant-Q design to preserve the same shape (bandwidth) over the entire boost/cut range.

EQ can do wonders for a sound system. Let’s start with loudspeaker performance. An unfortunate truth regarding budget loudspeakers is they don’t sound very good, usually because they have fewer components in the passive crossover network, so there is less loudspeaker-level EQ in the box than for more-expensive passive loudspeaker systems.

Usually this is due to an uneven frequency response. Also, an “ideal” loudspeaker possesses what is often referred to as a flat power response. This means that if you pick, say, 1 kHz as a reference signal, use it to drive the loudspeaker with exactly one watt, measure the loudness, and sweep the generator over the speaker’s entire frequency range, all frequencies will measure equally loud.

Equalizers can help these frequency deficiencies. By adding a little here and taking away a little there, pretty soon you create an acceptable frequency or pressure response – and a whole lot better sounding system. It’s surprising how just a little equalization can change a poor sounding system into something quite decent.

The best way to deal with budget loudspeakers – although it costs more – is to commit one equalizer channel for each cabinet type. This becomes a marriage. The equalizer is set, a security cover is bolted-on, and forever more they are inseparable. Use additional equalizers to assist with the room problems such as low-frequency coupling, humidity and temperature changes.