From Simple to Complex: The Wide World Of Drum Microphone Techniques

Drum sound can enhance or degrade an entire mix, so be sure to pay it due diligence

A minimal approach (Figure 1, below), also sometimes called area miking, uses only one or two mics overhead (or maybe a stereo mic), another in the kick, and maybe one on the snare.

The mics pick up the set as a whole, and the balance among the drum kit pieces depends more upon the drummer. Area miking tends to work best with acoustic jazz and other types of acoustic music.

Typically, overhead mics are placed about 2 feet above the “front” of the cymbals, while the snare mic is a couple of inches over the rim aiming at the center of the head, and the kick mic is inside, near the beater. 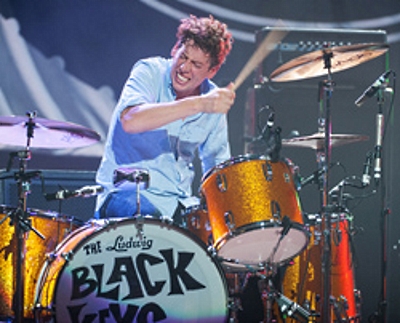 Patrick Carney of The Black Keys performing with a fully miked kit. Photo by Steve Jennings

For traditional jazz, where the kick drum is often tuned to be intentionally resonant – even a bit boomy – the mic is more commonly placed by the front head of the drum.

Something to try: reverse the polarity of the kick mic to see which polarity sounds best for your application.

Condenser models are a good choice for overheads because they provide a sharp transient response that accurately reproduces the cymbals. Large-diaphragm condensers tend to capture the fullness of the toms better than small-diaphragm units.

Also don’t be afraid to try dynamic mics. Many classic rack-tom and floor-tom sounds have been captured with Sennheiser MD 421s, Shure SM7s or SM57s, and quite a few others. 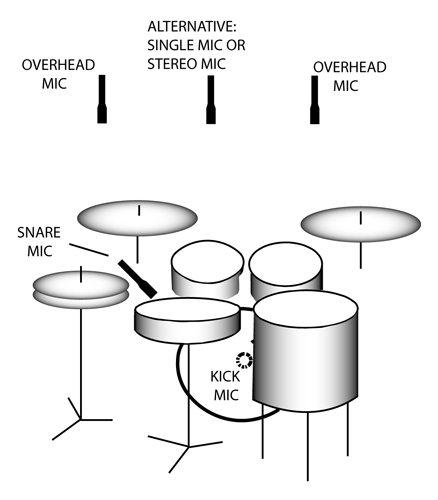 An overhead stereo pair can be coincident, near-coincident or spaced. The coincident-pair (XY) stereo technique yields a narrow stereo spread with sharp image focus, while the spaced-pair method provides a wide spread with more diffuse images. If the cymbals are too loud relative to the toms and snare, raise the overhead mics, lower the cymbals.

Since the mics are relatively far from the kit, they also pick up room acoustics and sometimes other instruments. Room reflections can make the sound a little distant and muddy. This can be good or bad; depending on the type of music, the sound you’re going for, and so on.

Careful placement (particularly moving the kit away from walls) can minimize or eliminate the problem. In churches (and some clubs), it’s common to see a plexiglass barrier placed around the drum kit, intended to keep the acoustic sound of the drums from overpowering the vocals and other instruments.