Kenny Chesney has established himself as one of the top touring artists in North America, consistently filling stadiums, arenas, and sheds year after year.

His ongoing “No Shoes Nation” tour with his superb band is no exception, keeping a busy schedule at venues such as Dallas Cowboys Stadium and Ford Field in Detroit while also featuring opening performances by Eric Church, the Eli Young Band and emerging artist Kacey Musgraves.

We detailed the sound reinforcement approach for Chesney’s tour last year (here), but this tour is quite notable due to several significant changes. Chief among them is Morris Light and Sound (based in Nashville) deploying a completely new house sound system headed by NEXO STM modular line arrays, as well as Chris Rabold now providing the front of house mix.

I caught up with the tour in late June for a show at Crew Stadium in Columbus, OH, an outdoor venue with a capacity of more than 20,000. Arriving at the back gate that morning, I was greeted by audio crew chief/system engineer John Mills, who’s also the VP of Morris Light and Sound, where he works closely with president David Haskell in managing the company.

We wandered out to the large stage (interestingly, a permanent structure at this facility), where a busy team – PA techs Phil Spina, Justin Meeks, Kyle Fletcher, and Tanner Freese joined by stage patch Jamison “Jamo” Beck – was assembling and flying the main system. 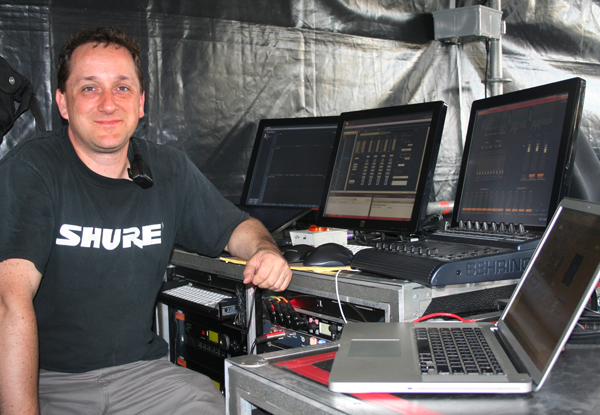 As Mills departed to join assistant system engineer Preston Gray in handling some things at front of house, I took a seat in the front row to observe the construction of the arrays, which were up in the air within an hour.

Later, I spoke with Mills about the new system, including specific technical aspects as well as more general topics. He and Haskell began contemplating a change quite some time ago, with an eye on serving the particular needs of the Chesney’s annual touring schedule while also strongly considering the countless events, shows and productions the company serves on a yearly basis. 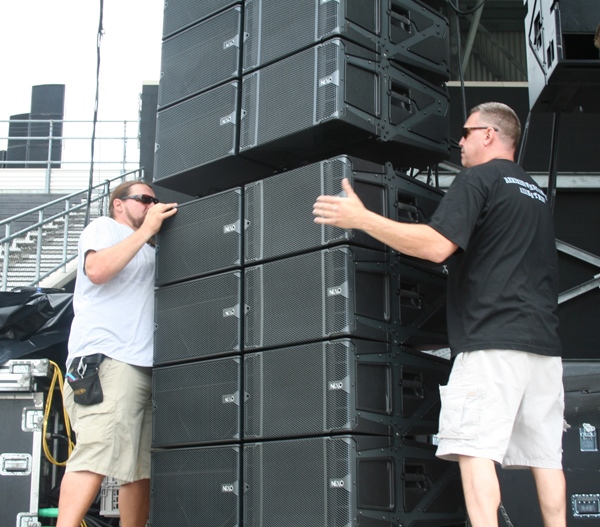 “We took a look at the market and identified three systems of interest, with one of them being NEXO STM,” he notes. “Our previous large-format system, while still quite good, was aging in terms of technology, and it lacked flexibility. So we determined that an upgrade was in order from both quality and business standpoints.”

He and Haskell arranged for direct comparisons of their list’s top three systems with their existing rig, all conducted in the same controlled environment. They also evaluated each of the three in terms of musicality, throw, and headroom, and significantly, modularity.

Out of this exhaustive process, NEXO STM emerged as their preference. “All of these systems were excellent, one a bit better at a certain aspect, the next a bit better at another aspect, and so on,” Mills says. “But in terms of overall sonic quality combined with extremely flexible modularity, STM won the day.

One of the completed STM array sets with M46 and and B112 modules forming main and side arrays, backed by an S118 subbass array. (click to enlarge)

“The truly modular nature is a big attraction,” he continues. “This is our biggest tour, by far, and then we also work a wide range of smaller tours and events of varying scale. This system allows us to provide a PA that is ideally scaled to the needs of the particular coverage requirements and program material of every one of those events, large down to small.”

Read More
“Tap-Tap-Tap, Is This Thing On?”

“The bottom line is that we wanted to move beyond a ‘stadium box’ approach to something that’s going to be out of the shop, working constantly and delivering consistent revenue.”

Multiple Configurations
The STM (Scale Through Modularity) concept enables line arrays to scale up or down depending on audience size, ranging from 1,000 to 100,000 people.

Arrays can be configured from three loudspeaker modules with the same cabinet width: M46 main, B112 bass, and S118 subbass. (An M28 “Omni” module for dedicated down fill is also coming soon.) Configurations can comprise arrays of main cabinets only, or main plus bass, or bass plus main plus bass.