Australian Dance Theatre (ADT), a contemporary dance company based in Adelaide, South Australia, is touring with a new work titled The Beginning of Nature that features an original score fusing electronic music with a string quartet accompanied by two vocalists.

Earlier this year the company adopted a system of Focusrite RedNet X2P 2×2 Dante audio interfaces and RedNet AM2 stereo audio monitoring units that has introduced significant touring efficiencies through a streamlined sound production workflow and reduced transport costs while also ensuring consistency from one show to the next for the audience and the performers.

“The RedNet X2P and AM2 suit our needs perfectly and have revolutionized the way we tour, allowing Dante to replace tedious XLR cables and audio snakes with a single Ethernet cable,” says Paul Cowley, ADT’s technical director and tour manager. The Focusrite system enables the introduction of the four on-stage microphone preamps onto the production’s Dante network while also providing local individual headphone monitoring control for the four musicians, two singers and front of house engineer. The rig includes four RedNet X2P interfaces, each with two mic preamps and a headphone output, plus three AM2 devices.

“We use the X2Ps to input the four DPA d:vote 4099 Hi instrument capsules, with associated bridge or body mounts, from the stage to the Dante network,” Cowley explains. “The live quartet mics are sent directly across the network to a MacBook Pro via Dante Virtual Soundcard. This MacBook is controlled by a master LTC timecode sent from another machine running Reaper.” 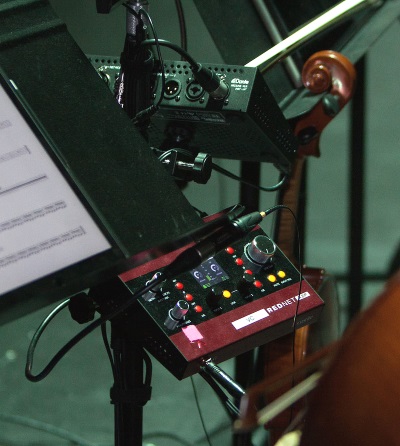 The clean strings are manipulated live in Cubase by a highly complex automation of plugins and effects.

“It’s important the quartet only hear their clean mix as the heavily processed mix would be distracting,” says Cowley. “So they receive their in-ear monitor feeds through the X2P with the option for them to mix ‘more me or less me’ from the local-versus-network pot. The ‘less me’ or ‘network source’ is an even mix of the clean strings with click track. The singers receive a simple IEM mix including click track and piano tune prompts via the AM 2s.” The musicians and singers all use Shure SE425 earphones.

The mixes are processed by a 32 Channel PreSonus StudioLive rack mixer (located on-stage) with a Dante sound card installed. He continues, “The PreSonus rack is controlled by a touchscreen Lenovo computer, so the front of house engineer is monitoring via another AM2, which is subscribed via Dante to the mixer’s solo bus.”

On previous tours the singers used a wireless microphone system introduced directly into the rack mixer via analog inputs. But for the company’s upcoming seven-week tour of Germany, Belgium and the Netherlands, says Cowley, all audio will be routed over Dante.

“We are renting Shure Axient AD4D digital wireless systems so that we can keep the inputs to the system via Dante. We are trying to remove as many analog connections from the performance system as possible. Even our on-stage DI box for the dancers to teach class using music from their phones is a Radial Dante DI.”

For the European tour the singers will be using Shure AD2 handheld transmitters fitted with KSM9 capsules. Since there are four unused inputs available on the string quartet’s RedNet X2P units the tour will also carry a pair of wired vocal condenser microphones as backups, he adds.

Cowley reports that The Beginning of Nature has been a labor of love for composer Brendan Woithe ever since he began working on it in 2016.

“Whilst being a very talented composer, Brendan, who is a long-time fan and user of Focusrite products, is also a technical magician,” he says, and spent months programming the show in Cubase. “The automation tracks are intensely complex, even down to auto mutes on the string inputs — almost after each note — to kill the chance of any feedback, as many of the effects applied are very long reverbs, echoes or loops.”

Much of Woithe’s work was done to ensure that the live processing could sit comfortably within the resources of the Macintosh computer hosting Cubase, continues Cowley, including long periods of soak testing. “Initially only a Mac Pro could handle the load, until the recent release of the MacBook Pros provided a spec that could handle the workload on a laptop, a far more tour-friendly footprint.”

The Reaper file provides additional show monitor information to the performers. An accompanying video file is distributed to vision foldback monitors either side of the stage for the dancers with local displays for the singers and musicians. “This video file acts as a virtual conductor showing master timecode, bar numbers and visual countdown prompts for singer and musician entries,” Cowley says.

ADT’s new Focusrite RedNet setup is extremely compact, allowing the equipment to accompany the tour party on commercial flights, thereby eliminating the cost and complications of shipping by sea freight or finding equipment of precisely the right configuration to rent locally.

“It’s certainly a huge advantage for us to be able to ship a monitor rig including string quartet inputs in a couple of Pelican cases,” says Cowley.

The company acquired the RedNet rig earlier this year shortly before taking the show to Amsterdam. The fact that the gear could travel with the company meant that the performers and technicians could familiarize themselves with its operation during rehearsals right up until the moment of departure, Cowley comments.

The Beginning of Nature, a compelling and ritualistic work based upon the idea of rhythms in nature, includes a libretto sung in Kaurna language, the first language of the Adelaide Plains, home to ADT.

Brendan Woithe composed the score in collaboration with Kaurna consultant Jack Buckskin. The company’s website elaborates: “Humans – and all living forms – exist within a phenomenally complex symphony of overlapping rhythms that constitute the very fabric of nature and life itself. These rhythms are manifested in day and night, the seasons, tidal patterns, migration, hibernation, sleep and waking, weather patterns, the binary of growth and decay and the various systems of the body.”