Punchy drums are what every engineer aims for in a mix and there’s definitely a way to get there.

Sometimes just using the right compressors can do the trick, but most of the time it requires some adjustment of the parameters to really get the sound you’re looking for.

Here’s a few excerpts from my Mixing Engineer’s Handbook, Audio Mixing Bootcamp and Drum Recording Handbook books all culled together for an overview on drum compression.

“It would be great if every drummer hit every beat on the kick and snare with the same intensity, but unfortunately that doesn’t even happen with the best drummers on the planet. When the intensity changes from beat to beat, the pulse of the song feels erratic, since even a slight change in level can make the drums feel a lot less solid than they should be. Compression works wonders to even out those erratic hits and helps to push the kick and snare forward in the track to make them feel more punchy. Let’s take a look at how to do that with the drums.

The Compression Technique
Before we get into specifics, here’s the technique for setting up a compressor. Regardless of the instrument, vocal or audio source, the set up is basically the same.

2. Turn the attack faster until the instrument begins to sound dull (this happens because you’re compressing the attack portion of the sound envelope). Stop increasing the attack time at this point and even back it off a little so the sound stays crisp.

3. Adjust the release time so that after the initial attack, the volume goes back to at least 90 percent of the normal level by the next beat. If in doubt, it’s better to have a shorter release than a longer one.

4. Set to the lowest ratio above 1:1 (which means no compression). Usually on drums, the lowest ratio provides the most punch, since it lets the transients of the drum be heard. 2:1 or 1.5:1 work great.

5. Bypass the compressor to see if there’s a level difference. If there is, increase the Gain or Output control until the volume is the same as when it’s bypassed.

Tracking Versus Mixing
Generally speaking, most engineers won’t compress much, if at all, during tracking, since anything you do while recording can’t be undone later. That said, some engineers like to limit the instruments a little (only by a dB or two) just to control the transients a bit. A compressor becomes a limiter when the ratio is set to 10:1 or more. If you choose to do this, make sure that the limiter kicks in on only the highest peaks. If it’s limiting constantly, it’s probably too much and you might regret it later since it can’t be undone. Decrease the threshold control so it only limits on the occasional transient.

Compressing The Kick And Snare
The biggest question most engineers have when compressing either the kick or snare is “How much is enough?” This depends first and foremost on the sound of the drum itself and the skill of the drummer. A well-tuned drum kit that sounds great in the room should record well, and a reasonably good drummer with some studio experience usually means that less compression is needed because the hits are fairly even. Even a great drummer with a great sounding kit can benefit from a bit of compression though, and as little as a dB or two can work wonders for the sound. With only that amount, the setup of the compressor is a lot less crucial, especially the attack and release.

Read More
Working At Success: Why Do Some - But Not Others - Rise Above In The Studio?

Sometimes you need the kick or snare to cut through the mix and seem as if it’s in your face, and that’s when 3 to 6dB or so does the job. It’s here that the setup of the compressor is critical because you’re imparting its sound on the drum. Make sure you tweak the attack and release controls as above, and even try a number of different compressors. You’ll find they all react differently, even with the same settings, so it’s worth the time to experiment. Remember: if the attack is set too fast, the drum will sound less punchy, regardless of how much compression you use.

Compressing The Room Mics
The room ambient mics are meant to add the “glue” to the sound of a kit, and can really benefit from a fair amount of compression, which means anywhere from 6 to 10dB. In fact, many mixers prefer the room sound to be extremely compressed, with way more than 10dB being the norm.

The problem is that the more compression you use, the more the ambience of the room is emphasized. That’s okay if you’re recording in a great sounding room, but if it has a lot of reflections and the ceiling is low, you may be emphasizing something that just doesn’t add much to the track. One trick is to actually set the attack time so it’s much shorter than usual to cut off the sound of the initial drum transient, then tuck the room tracks in just under the other drum tracks.

Note that regardless of how good the room mics sound, the more of them you use, the less space there will be for the other instruments in the track. The more instruments there are, the more you’ll have to back them off. Sad but true, but unfortunately, there’s only so much sonic space to any mix.”

Bobby Owsinski is an author, producer, music industry veteran and technical consultant who has written numerous books covering all aspects of audio recording. For more information be sure to check out his website and blog. Go here to check out The Audio Mixing Bootcamp.

Bobby Owsinski is an author, producer, music industry veteran and technical consultant who has written numerous books covering all aspects of audio recording. To read more from Bobby, and to acquire copies of his outstanding books such as The Recording Engineer’s Handbook, be sure to check out his website at www.bobbyowsinski.com.
All Posts
Top Stories
Explore All Church 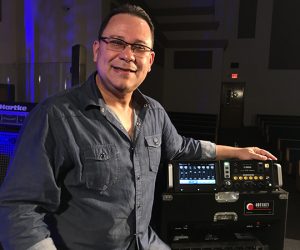