Front fill level determines the location of the acoustic crossover. Ideally, front fills are not loud, covering only a small area. As a listener walks away from the fills, coverage should smoothly fade into the mains, with no discernable difference in level or frequency response between the two systems.

Key to achieving this goal is placing the acoustic crossover at a location at which the mains level has diminished compared to its on-axis response.

The first method to front fill tuning is that recommended by Bob McCarthy, Merlijn van Veen, and other respected leaders in the system optimization world. Called “Level Time Combine” by Jamie Anderson of Rational Acoustics, the approach makes seams between the fills and mains that are first set to be equal level, and then time aligned to be equal in phase.

This method ensures that combing is nonexistent at the acoustic crossover. In other locations combing will exist, as it is impossible for more than one position to see perfect time alignment between spaced sound sources. The severity of combing is minimized elsewhere, however, as locations other than the acoustic crossover see less than equal level between the mains and fills. The farther you move from acoustic crossover, the greater the time is misaligned, but less similar the relative levels.

Key to this approach is picking an effective location for the acoustic crossover. A position mid-way into the target area is typical. To be more precise, the ideal spot is where mains response has diminished -6 dB compared to their on-axis level.

This is the classic array construction technique in which neighboring loudspeakers are placed so the -6 dB coverage limits of their high-frequency (HF) horns are aligned to make an equal level seam. Since -6 dB + -6 dB = 0 dB, the seam creates an even-level transition between the two loudspeakers. Finding the -6 dB location of the mains HF coverage and setting the front fills for equal level at this position can create a smooth shift from system to system. 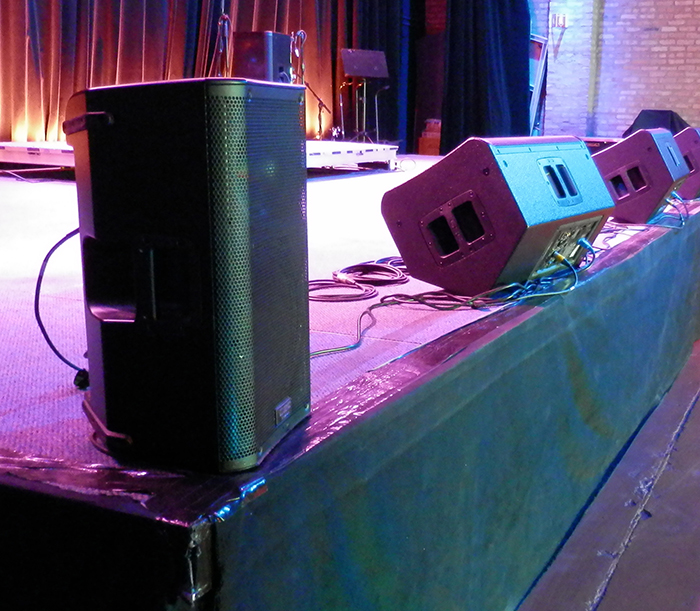 In reality, due to horn design and acoustic reflections, it can be difficult to find the location at which mains HF has attenuated by -6 dB. This is especially true with line arrays, as their proportional Q horns narrow in vertical coverage as frequency increases. With line arrays, the -6 dB location varies with frequency, and the system engineer must pick a frequency at which to align the acoustic crossover. A vocal intelligibility frequency, perhaps 4 kHz, is recommended.

Objectivity is the mantra to the Level Time Combine approach, as fills are aligned in a measurable and repeatable manner. Use of FFT measurement software, such as Rational Acoustics Smaart, is preferred by many to avoid the subjectivity inherent in tuning by ear. Here’s a suggested workflow:

1. Using FFT software, capture a trace of the mains system frequency response. If working with a line array, this may require averaging multiple microphones spaced across the coverage area, as response can vary with location.
2. Place a measurement mic on-axis with the front fill and EQ it to match the trace of the mains system frequency response. A typical goal is to have the entire system sound similar everywhere. Reducing highs in the fills might be necessary to match the mains, which are farther from the audience plane and have experienced HF air loss.
3. High pass the front fills to reduce low-frequency (LF) combing with mains, subs, and stage wash. Since low frequencies are omni directional and audible in the front rows from other sources, they can be removed from the fills.
4. Choose a location midway into the target area to be the acoustic crossover. The ideal position is where HF from the mains attenuates -6 dB compared to the on-axis mains level.
5. Capture a trace of the mains system at the acoustic crossover. Adjust fill level to be equal to the trace in the vocal intelligibility frequencies (around 4 kHz).
6. Using the FFT software for guidance, delay the fill to match the mains system arrival time. Note relative phase between the mains and fill and reverse polarity of the fill if necessary.

Eric Ferguson is an assistant professor of Live Sound Production at the New England School of Communications at Husson University in Maine. He also has extensive experience in the studio and with sound reinforcement, including world touring with artists such as Lee Ritenour and James Ingram.
All Posts
PrevPreviousPowersoft Deployed To Drive Large-Scale System For Tabernacle of Glory In Miami
NextCODA Audio To Debut New N-APS Point Source Loudspeakers At PLASANext
Study Hall Top Stories
Explore All Study Hall