A couple of years later, I had a similar idea about effects racks. Up until that time, it was standard procedure to custom build every FX rack for every show. This, of course, is the norm for tours, but for a company that did mostly one-offs it was a time-wasting recipe for disaster.

Remember that this was in the analog days, when every show needed at least one outboard rack. My concept was for two standard FX rack configurations.

The smaller 10-U rack consisted of a power panel/light (e.g., Furman PL-8), a quad noise gate, a quad compressor, a blank panel (c/w patch for a 2-channel device), a digital reverb, a DDL, and CD/cassette combo unit (3-U).

My vision for this package was that it could do, for example, a corporate event during the day with a dance band in the evening, a side stage at a music festival, or any other 24- to 32-channel gig with a mixture of talking heads and live performance. 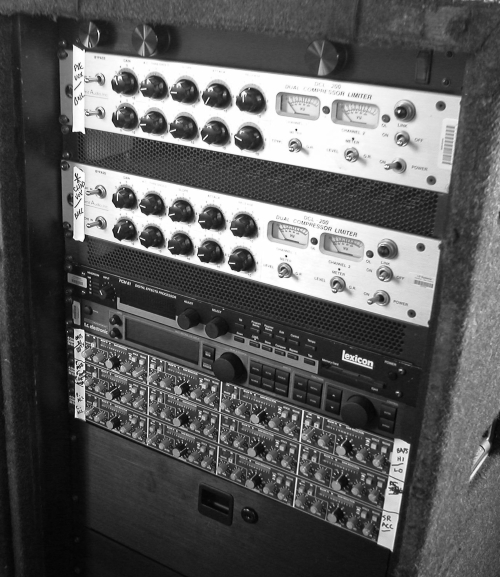 Effects racks aren’t quite as common as they used to be, but the point stands that all rack-mount gear can be stored and deployed efficiently.

The larger 16-U rack doubled up on the gates and comps, added a digital reverb and had patch for four extra inserts. Eventually we added a third reverb and a dual 31-band EQ to match the spec of a regular client. These racks were designed for concerts and that’s what they mainly did.

Interestingly, one objection to this idea that I heard frequently was “every sound tech wants his rack laid out differently; this one wants the gates at the top and FX at the bottom, that one wants FX at the top” and so on.

Well, in the years that followed until I departed the company, I never heard one complaint, and further, they were used by dozens of “name” touring acts that came through Toronto in the mid-to-late 90s. The fact is that on a one-off, what every sound tech really wants is a rack in which every piece of gear works, is patched and labeled in a logical order, and doesn’t buzz and hum.

By the way, I checked with my successor and these racks were in regular use until around 2010, when the digital console effectively killed the outboard rack. So they were together as complete packages for around 17 years. Think about the shop labor required to strip, shelve, re-populate, patch and quality-control even one of the smaller 10-U racks. Let’s say it takes four to five hours, which conservatively translates to $50.

Now, if that rack goes out even 40 times in a year, that’s $2,000 in labor cost savings. It doesn’t take long for those savings alone to pay for every piece of gear in that rack, never mind the fact that the equipment has so much less wear-and-tear when it’s not constantly being racked and un-racked.