No matter your musical predilection, there’s no denying that Barbra Streisand is one of the biggest talents in show biz. Yet the notoriously stage-shy artist’s performances have been few and far between; the beginning of her 2012 Back To Brooklyn tour marked only her 82nd performance in a six-decade career.

For the 1993 Concert Tour—which was her first outing in nearly 30 years—Streisand built an audio dream team spearheaded by audio innovator, engineer and sound designer Bruce Jackson.

His challenge was to create a comfortable yet controlled live sound environment designed to make Streisand comfortable, while simultaneously ensuring her audience would get the great sound at every seat. Often this involved carpeting a venue at tremendous expense, or configuring and designing gear.

Jackson, who had worked with other notorious perfectionists including Elvis for six years and Springsteen for another 10, brought on orchestra mixers Chris Carlton and Kevin Kilpatric to help shape his vision for Streisand’s tour. He was rewarded for his efforts on her 1995 TV special Barbra: The Concert with an Emmy Award for sound design and sound mixing.

Flash forward to 2012. Strategic planning was already underway for another tour when sound designer/front of house mixer Carlton assumed Jackson’s reins in the wake of Jackson’s untimely death in a plane crash in early 2011.

The Back to Brooklyn tour, a 12-date run of fall shows, would bring Streisand back to her roots: to Brooklyn (where she jokingly mentioned that the last time she performed in the borough was “on somebody’s stoop on Pulaski Street” as an 8-year-old) in the city’s new Barclays Center, and also to the MGM Grand, the spectacular hotel/venue in Las Vegas she helped open on New Year’s Eve in 1993. 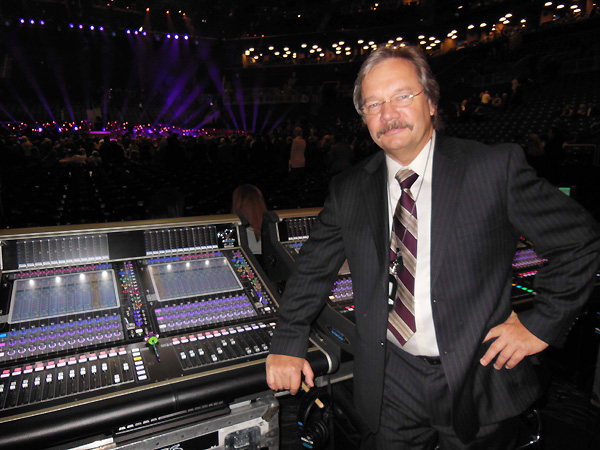 Each of the Brooklyn tour shows clocked in at about two-and-a-half hours and featured a variety-style format, with Streisand performing along with a 72-piece orchestra, a top-tier rhythm section of studio stalwarts from Los Angeles, an 80-piece guest choir in each city, and special guests including her son, singer/actor/writer Jason Emanuel Gould, world-renowned smooth jazz trumpeter Chris Botti and Italian teen-tenors trio Il Volo—plus touching stories and a tribute to her longtime friend and composer, the late Marvin Hamlisch.

Inspired by Jackson’s legacy, Carlton designed a new system worthy of Streisand for the tour that would improve on the previous technical model while streamlining and advancing the technology. His positive experience working with DiGiCo consoles on the 2010 Vancouver Olympics was still fresh in his mind as he teamed with DiGiCo and Clair Global at Clair HQ in September to build and program the new gear for the tour. 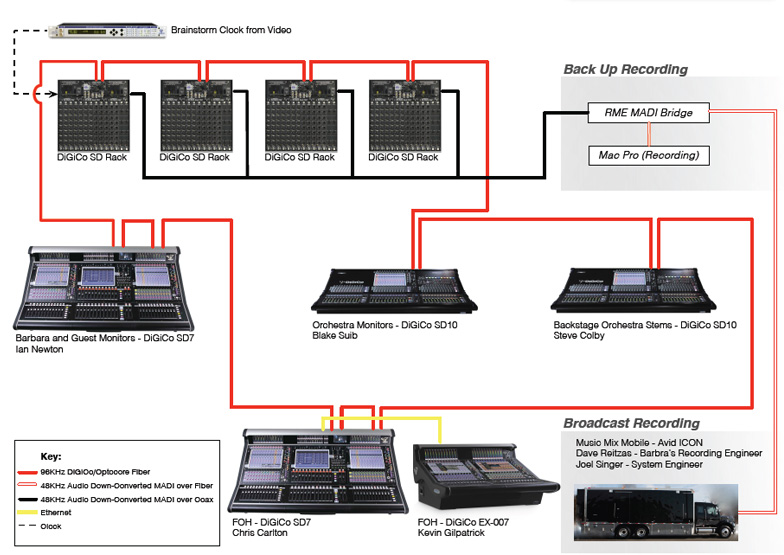 A diagram of the console and networking configuration. Photo credit: Matt Larson. (click to enlarge)

With a team of 12 engineers on deck, the updated system was comprised of six consoles in five mix locations: front of house (Carlton on an SD7 with Kevin Gilpatric on an SD7-EX007 expander), artist monitors (SD7 run by Ian Newton), band monitors (SD10; Blake Suib), orchestra mix stems (SD10; Steve Colby), and David Reitsaz on a Avid Icon in the M3 Music Mix Mobile truck.

What made the setup so distinct was that all FOH, monitor and broadcast recording engineers shared the 170-plus inputs, generated from one central SD system rack—comprised of four DiGiCo SD Racks—and linked solely by a DiGiCo/Optocore 2GHz fiber optics network running at 96 kHz. On some dates including Brooklyn, they used broadcast recording feeds into a Brainstorm DCD-8 that could receive Burst or Word Clock, and the DiGiCo system would sync off of that.

In addition, the SD Rack’s third MADI port handled live down-conversion from the 96 kHz to 48 kHz, which fed to both the mobile truck as well as to a backup redundant recording system located in the orchestra mix room. 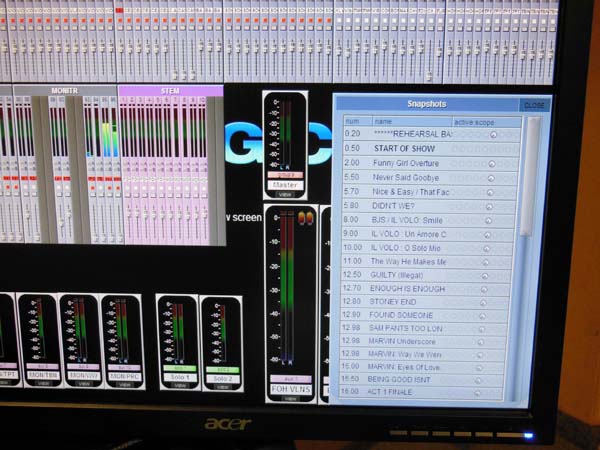 Plenty of snapshot capability comes in handy for a production like this. Photo credit: Matt Larson. (click to enlarge)

“The audio production on this tour has evolved slightly from what we’ve done in the past only because of the newer technology that was available to us,” explains Carlton. “As far as the amount of mixers and personnel involved with this show, it’s pretty much the same team we’ve been working with for the past 12 years—although she doesn’t go out that often, as you know. We revisited what we had done back in 2007 and wanted to incorporate what worked well back then, as well as identify areas that we could improve upon with the current technology.

“In the past, our system involved a lot of analog splits and another digital console, which worked well for us, but this is a much better, streamlined solution for having multiple mixers online with no passive splitters involved.  Having an all-digital fiber optic distribution network ensured that we had no additional unwanted loading on the microphones, too.”