Striving to reproduce what's put into a sound system -- nothing more, nothing less...

BB: After signal, the next step is to look at the qualities of the reinforcement equipment?

JM: Just like there’s a huge difference in image quality between a VGA projector and a 4K projector at the same level and brightness, the same concept should apply to loudspeakers as well. SPL and coverage specs only give you part of the picture.

One key parameter in looking at loudspeaker equipment is what we call linearity—how accurately a system translates an audio signal, particularly when reproducing it at high levels. Linearity is particularly important in the parts of the system that remain in the analog domain. The industry has lost sight of that in recent years.

Back in the 1940s and 50s, there was a lot of emphasis on developing linear sound reproduction, because it was a challenge to make the different sounds of instruments come out distinct and intact, rather than being muddied by harmonics. In a linear system, if you put in a piano and a trumpet, you get the two back out, without anything added or taken away. If you want to add an effect, you can use plug-ins at the console level upstream. The linear system reproduces what you put in, nothing more, nothing less.

If you put five tones into a subwoofer, a linear system will reproduce only those five tones. In a non-linear system, the subwoofer will alter the original ones and add other tones, which you may or may not find pleasing. Non-linear loudspeakers are difficult to measure and predict, and this makes it harder for the user to attain a specific end result.

BB: If a system is linear, does it make it easier to achieve high-resolution audio?

JM: It depends. For example, PCM digital systems are inherently linear. The first systems were developed by the military to make sure that data was transmitted accurately, so it would not be corrupted. But these were very low bit-rate systems, because that’s all that was necessary for data.

To transmit music, you need higher resolution by several orders of magnitude. A standard CD at 16-bit and 44.1 kHz is linear at the digital output, but it doesn’t have the same resolution as a 24-bit/96 kHz digital output.

BB: Then I assume the next step is to look at the room? 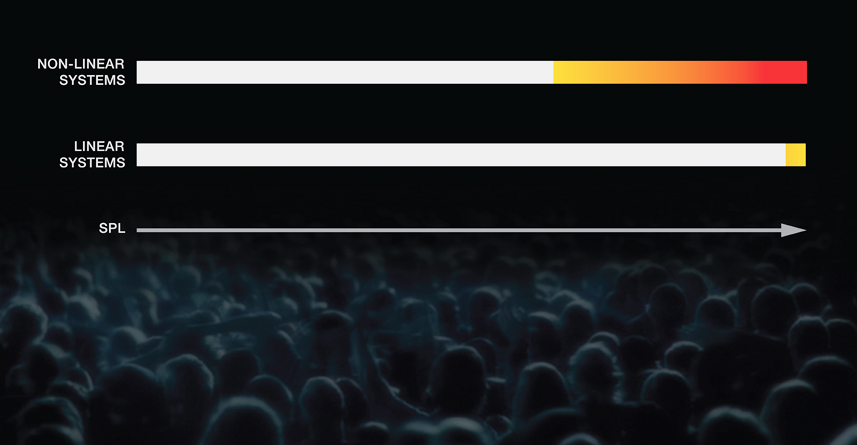 Non-linear systems change the sonic characteristics of a signal as level increases.

JM: Yes, and the loudspeaker-to-room interface is often the hardest part, because you’re introducing reverberation characteristics, which present a three-dimensional problem. Linear amplification and loudspeaker systems that are well controlled make this problem easier to solve effectively.

This is why at Meyer Sound, we start by developing procedures and solutions for permanent installations, particularly with Constellation active acoustics and for cinema auditoriums. Once we’ve established the procedures in those applications, and achieved the desired results, we can broaden this to other sound reinforcement applications, such as touring.

BB: With all the new technology at hand, why do we still fall short?

JM: Sometimes too much new technology can make a problem harder to solve. In a complex system, if somebody drops the ball upstream you’re stuck with the problem. We experienced that recently when our loudspeakers were installed in a large system with all-digital signal interfacing and networked distribution.

We had severe distortion problems and discovered that the digital mixing console was overloading the network. And the people that put in the network had already left the site. We ended up fixing it ourselves, because nobody was checking to see that the whole system was working to that point.

It made us realize that it doesn’t make any sense to put in high-quality speakers if the digital system in front of it is overloading. On the other hand, why put in lousy loudspeakers at the end of a very high quality digital system?

We need to be systems-oriented. The whole thing has to work as a unit and be tested as a whole system. You can buy a standard test disk for your Blu-ray player, but in high-end sound reinforcement we don’t have an equivalent for that. It’s not part of our thinking.

BB: What changes are needed if we want to achieve greater audio resolution?

JM: The first thing is to set clear goals for the source signal, loudspeaker system response, and acoustic behavior of the space, and look at them in a systemic way. We also need to set standards and testing procedures that every manufacturer can apply and every user can understand.

If you buy a 4K projector from one of the major companies, you know what the result will be when you turn it on and point it at the screen. For example, even a trained video pro might be hard pressed to see the differences between, say, a Sony and a Christie with similar specs. But that doesn’t always happen in the audio world, where it’s impossible to evaluate the actual performance of different products with a comparison of specs. It shouldn’t be so difficult.