Excision (Jeff Abel) has been dropping beats since 2004 and has been an honorary member of the PK Sound family for over a decade. Hailing from British Columbia, Canada, Excision is a major player in cultivating bass music globally, with his passion for production driving him to inject his trademark sound into the rapidly growing electronic music scene.

Well known for the production quality that he brings to his live shows, Excision and the Lost Lands festival saw no exception. “The scale of Lost Lands started out a lot smaller, we were initially hoping for 10,000 people, but when we went on sale and sold nearly 20,000 tickets in the first 48 hours we realized that not only was demand far greater than we thought – so were the expectations,” says Excision. 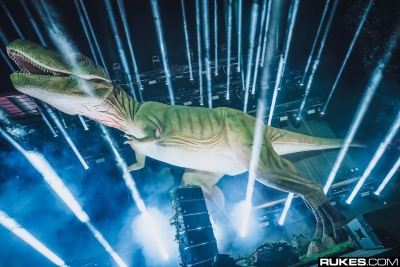 “I think the biggest key to our success was that we literally threw our entire plan out the window that day, 2 days after launching, and started over from scratch, with the goal of making it the best possible festival we could.”

At Stage one, also known as the Prehistoric Paradox stage, PK Sound deployed the Trinity line array as the main hangs with 16 modules per side, as well as an individual hang of 12 modules to fill the VIP section. Additionally, the PK team deployed 12 ground-stacked VX-10 line array modules for on-stage out-fill (6 per side), 8 VX-12 line array modules for front fill with field delays consisting of 16 additional Trinity modules, 8 per side.

The 78 CX-800 subwoofers provided an equal amount of low-end. Only partial cardioid deployment was necessary to control the sound field off axis. On stage monitors consisted of 4 VX-10 line array modules (2 per side), 2 CX-800 subwoofers (1 per side) and 6 SW-215 stage wedges.

The Cave of Souls stage was located beneath a massive festival tent structure which housed two main hangs consisting of 24 Trinity line array modules (12 per side). Main front fills consisted of 4 VX-12 line array line array modules which were all balanced with a smaller configuration of 42 CX-800 subwoofers. The stage monitor set-up consisted of 4 VX-12 (2 per side) with an addition of 2 CX-800 (1 per side) for the low-end. In order to provide an accurate sound experience for the performers, 6 KLARITY-12 loudspeakers were utilized as stage wedges for the downstage mix.

“The sheer power of Trinity is mind-boggling,” says Lost Lands second stage front of house system tech, Kyle Pace, “The design is flawless and it actually feels and looks like it’s built to push limits.”

“A great aspect of Trinity is the control you have over your horizontal directivity while the array is in the air,” Pace continues, “Being able to change from 50-degrees to 120-degrees mid-show or in any tight situation gives the engineers on site unlimited capabilities.”