Enjoying The Challenge: Quality Sound And Professionalism For Tributefest

The number of music festivals being staged around the world has grown tremendously over the past decade or so.

They’re a huge draw for good reason – audiences get several hours (and sometimes even a couple/few days) of live music, provided by artists of diverse or similar styles (something for everyone’s tastes), and usually at a reasonable price.

Tributefest in Santa Clarita, CA (just north of Los Angeles) is emblematic of this thriving genre. Held in the city’s beautiful Central Park landscape, it presents 10 hours of consecutive performances by what its name implies: top tribute bands paying homage to classic artists and groups such as Johnny Cash, The Beatles, U2, The Police, and several others. This is enhanced further by dozens of beers on tap and some of LA’s best food trucks providing their wares.

Festivals have also proven a boon to sound reinforcement and production companies, presenting increased business opportunities to those that can meet the challenges of serving multiple artists in a compressed time frame while sticking to a tight schedule. It’s a balancing act – part diplomat and part taskmaster, combined with on-site technical acuity and long-term planning.

DJE was invited by Tributefest organizers to return after a highly successful first run last year, when they were brought in as an alternative to the company who had worked the festival’s inaugural run in 2010. 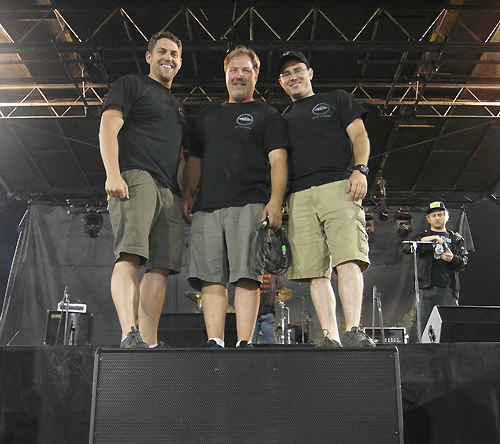 “One of the keys to making it work, and this is true of any festival or other multi-act event, is to take the time to make advance calls to every single band,” notes Nick Cimino, co-owner and founder of DJE with partner Ted Tesoriero. “As a result, we have a complete input list for each one of them, along with a detailed stage plot, so things run as smoothly as humanly possible. It all starts with those phone calls.”

This year’s Tributefest ran from 11 am to 10 pm on a Saturday, featuring eight acts performing for an hour each, with 20-minute changeovers in between. Cimino served as the point-man on stage, managing the transitions and meeting other needs, while Mike Martinez of DJE served as monitor mixer.

Tesoriero split his time between stage and house position, while industry veteran Brian English (of QSC Audio) was brought in to mix FOH.

The expansive coverage area at Central Park, bounded by temporary fencing on all four sides, ranged more than 200 feet deep, and was almost that wide as well. DJE arrived the day prior for load-in & set up. 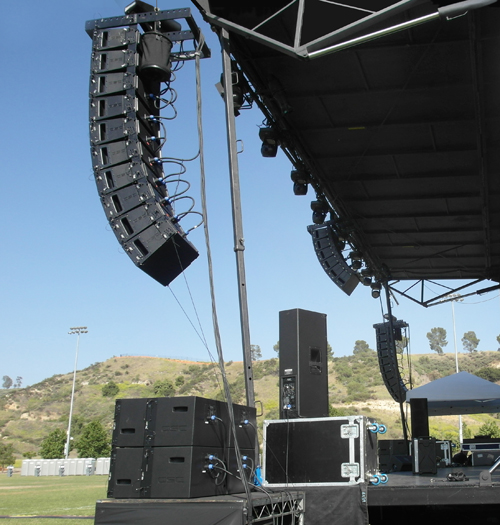 A look at the QSC WideLine arrays, including a center array to further enhance vocal intelligibility. (click to enlarge)

As with last year, DJE deployed QSC WideLine-8 compact line arrays for the event, taking advantage of the format’s wide 140-degree horizontal dispersion to insure coverage at the farthest extremes of the listening area.

The flown left and right WideLine-8 arrays were each comprised of 10 modules, an increase of two modules per array compared to the previous year. This was done primarily to increase the system’s overall output in anticipation of a larger crowd. This indeed came to pass, with well more than 4,000 in attendance.

The audio presentation was bolstered even more with a center flown array made up of six WideLine-8 modules, primarily fed vocal programming to further enhance intelligibility. “The sound quality was incredible in terms of dynamic full-range output with exceptional intelligibility, spanning a very wide listening area,” states Tesoriero. “It’s amazing what you can achieve with these compact, lightweight boxes in a broad range of applications.”