Engineer/Producer Hugh Padgham: “I Was Always Trying To Break The Rules”

Part 2 of insights shared by Engineer/Producer Hugh Padgham, who was behind some of the greatest recordings of the 1980s and 1990s era, including how he created the unique Phil Collins drum sound, approaches to working with artists, his views on the ups and downs of digital, career advice, and more.

Howard Massey: How important do you think formal training is in succeeding as a producer or engineer?

Hugh Padgham: Well, I’m all for creativity, and it’s true that sometimes not knowing too much is great and having too much knowledge can be a hindrance, but if you want a flute to sound like a flute it may not be a bad idea to know where to place a mic, and history has deemed that there are certain ways of doing things that yield the best sounds.

For example, trumpets recorded in the digital domain can be unbelievably hard and nasty-sounding unless you understand the physics of it, and that will teach you to perhaps use a ribbon mic instead of a condenser mic and maybe smooth it off with a tube preamp.

But I was taught fairly formally—you’d have to turn up at ten o’clock in the morning and you were expected to wind up cables properly. Landsdowne was actually quite a stuffy place and at the time I couldn’t wait to get out of there, but looking back on it later I realized that it was a very good grounding.

But I was always trying to break the rules, and that’s how I came upon the Phil Collins drum sound, among other things. 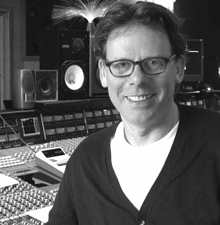 Well, that was one of the wonderful things about the SSL desk. Before then, if you wanted to put a compressor into the sidechain or insert points, or any piece of outboard gear, you had to first pick up a patch cord, think about where you were going to plug it in, and then physically plug it in; it was a very methodical process.

With the SSL, you suddenly had a console that presented all these options—compressors and noise gates—on each channel, right in front of you. Having the ability to press a button and compress or gate a signal—literally without having to do anything else—made you experiment a bit more.

Once I was able to plug that mic into a channel, I started mucking around with a noise gate for some reason, and there was the sound.

Were you flattered or irritated when everyone in the world began copying that sound and appropriating it for themselves?

I was so busy in those days, I barely noticed, to tell you the truth. But I suppose I was flattered, really.

In some ways, it became the sound of the eighties.

Perhaps, but George Massenburg was getting even more live drum sounds on the records he was making with Little Feat at the time—a group I loved then and still love to this day. Perhaps it wasn’t quite as crunchy a sound, but it was easily as live.

You know, if you stand next to someone playing drums, it’s very loud, so I was just trying to find a way of making them sound loud even if the volume was turned down.