The Twitterverse was hopping a while back with news of Canadian singer Grimes being “electrocuted” during a concert in Dublin. (Go here and #Grimes on Twitter.)

While she was shocked on stage, she definitely wasn’t electrocuted multiple times. That’s because the word “electrocution” refers to death by electric shock. If she was indeed killed by electric shock and brought back to life multiple times to keep performing, that must have been one heck of a show. Sort of like Frankenstein’s monster playing backup keys for your band (now that’s a show I would pay to see).

So how did we get here?

Mostly, it’s the media. Not a day goes by that I don’t read or hear some misuse of words about electricity in both mainstream and alternative media. Whether it’s a Jeff Rossen report about street poles with “current on them” that spark when rubbed with a screwdriver, or Al Roker reporting about being safe from lightning striking a car because of “rubber tires insulating you from the ground,” it’s just plain incorrect information that feeds the “old wives tales” factory. (The video of Mr. Roker’s statement apparently isn’t online anymore but I witnessed it and contacted him and his employer about it immediately, without reply.)

To set the record straight, we are quite safe from lightning strikes in our (non-convertible) vehicles due to the Faraday Cage created by the car metal surrounding us. That’s what bends the electricity around the occupants, keeping them safe if a lightning bolt hits the vehicle. Of course, you don’t want to have your hand stuck outside the window in a lightning storm, because you’re no longer inside the cage and you’ll likely be electrocuted. And yes, I mean killed by electric shock. For more on this, go here.

So what did happen to Grimes? Well, there must have been something on stage that wasn’t properly grounded. (The report linked above attributes the cause to a “malfunctioning pedal.”) The lack of electrical grounding allows a normal AC power leakage current to create a voltage bias on a piece of gear (guitar, keyboard, microphone, etc…).

If you get between this electrically “hot” gear and something else that is properly grounded, that’s when you feel a shock. Depending on the voltage, how wet your hands are, and the source impedance of the fault current, you’ll either be shocked, knocked unconscious, or possibly even electrocuted (again, killed by electric shock). Check out this drawing for a real 18th-century experiment about feeling electrical shocks: 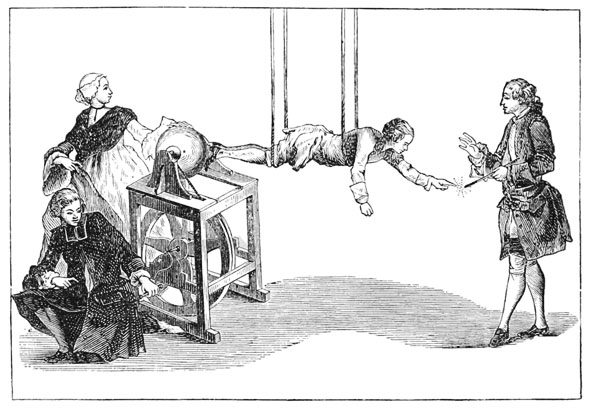 Well, they should be, but sometimes there’s a monkey wrench thrown into the works. For instance, I’ve had a number of artists show up on stage with a cool vintage guitar amp they bought at the local pawnshop. While it might sound great, it could very easily have a broken or missing ground wire on its power cord. Normal leakage currents can turn into AC bias voltage on the chassis of these backline amplifiers without a proper ground path to drain away these voltages.

However, as long as the musician is touching only their guitar and not a grounded mic at the same time, they may never know that their body was electrified to 120 volts (or 230 volts in Dublin). That is, until the moment when they’re touching both their guitar and their microphone at the same time. That’s when a fault current will flow through their body on its way to “ground.” More about that here.

Mike Sokol does sound system design and training for JMS Productions, his consulting company in Western Maryland. Visit www.livesoundadvice.com for his educational articles and videos, and email him at [email protected] with comments and suggestions.
All Posts
Top Stories
Explore All Study Hall