Every summer since 2001, the Salt Lake City Jazz Festival has brought a wide range of local and national talent to the downtown area. Pratt Sound has been the audio provider for every one of them.

This year, they covered the outdoor Gallivan Center, which can host up to 4,000 people, with Electro-Voice X2 line arrays.

“It’s a nice little outdoor festival, deserving of a sound system that does justice to the incredible music being played,” says company founder and president, Ed Pratt. “That’s why we brought our EV X2 line array. It has the power, fidelity, and coverage to deliver great sound under any conditions.”

Pratt notes that the Electro-Voice X2 system allowed him to mix at full concert levels with only six line array boxes and two subwoofers per side, providing all the headroom required to deliver musical clarity and balance for quartets and orchestras alike.

The twin main arrays consisted of X2-212 loudspeakers with 90-degree dispersion, with ground-stacked pairs of X12-128 subwoofers on the deck below. The entire rig was powered by six TG-7 amplifiers with RCM28 network and digital signal processing modules, allowing the entire system to be networked together for centralized monitoring and control via the EV IRIS-Net system.

“We’ve done this festival for 17 years. This was our first time using the X2 for it, and it was really a game-changer,” says Pratt. “The system really sounded fantastic, and that’s not just my opinion. All
weekend, I was getting comments from the musicians who came out front to listen when they weren’t playing. 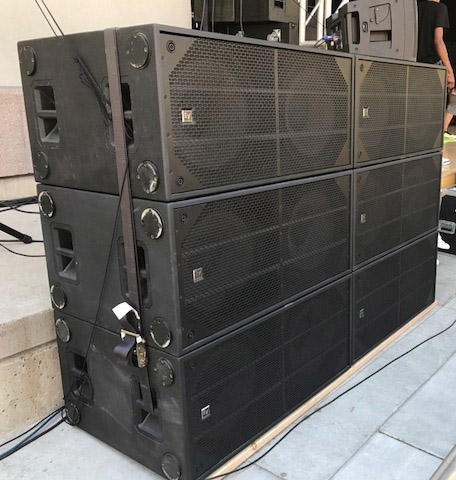 “Bob Anderson, who is an incredible Sinatra tribute singer, came up to me and said, ‘I can’t believe how good that house mix sounded,’ and he gets nothing but the best in sound for his Las Vegas gigs. Best part was, it was so easy. Give me a good set of microphones, a great artist, and an X2 system, and I guarantee you’ll be impressed.”

Pratt is quick to note the X2 excels across a wide range of genres, making it his go-to system for any major event, large or small.

“A few weeks ago, we had Chris Brown doing some really bass-intensive hip-hop, so we brought out our full system – 24 boxes of X2, twelve X12-128 subs, and 16 TG-7 amps, and it was great,” he says. “We get the same kind of reaction when we do country, rock, or reggae shows, big or small. The X2 may not be the biggest line array box out there, but it’s got tons of power and amazing fidelity. The sound equals anything I’ve heard, and in my 40 years in the business, I’ve pretty much heard it all. It’s definitely my go-to system these days. In fact, if I’m going out on a show, you can bet the X2 is coming with me.”