For King Crimson’s first full Austin concert in over two decades, the band was booked into 3,000-seat Bass Concert Hall on the University of Texas Performing Arts Center and provided with sound reinforcement by Electro-Voice.

Because the band is not carrying a PA on its Radical Action tour, the band’s front of house engineer Chris Porter and system technician David Taylor wanted a sound system that would project both the power and musicality of the band.

Long known for their complex soundscapes, the 2017 version of King Crimson features eight players, referred to by founding member Robert Fripp as a “double quartet formation.” Fripp and vocalist Jakko Jakszyk play guitars, with Tony Levin on bass and Mel Collins handling all manner of reeds. Percussion is present in great abundance, with Gavin Harrison, Pat Mastelotto, Bill Reiflin and Jeremy Stacey on drums, the latter two doubling on keyboards.

“For this show and this music, intelligibility is key. There’s just a lot going on,” says Chris Porter, who worked with Robert Fripp on the studio mix of the Radical Action DVD. “Making everything clear, the ability to hear everything going on, is a challenge for a PA system,” Porter notes. “Having heard the live multitracks we record each night, I can say that both the Austin shows went down very well for us.”

The system consisted of twin 12-element hangs of X2-212 loudspeakers, with nine 90-degree dispersion boxes above three 120-degree speakers for controlled dispersion throughout the concert hall. Lows were provided by two groups of three X12-218 subwoofers, deployed in cardioid configuration. 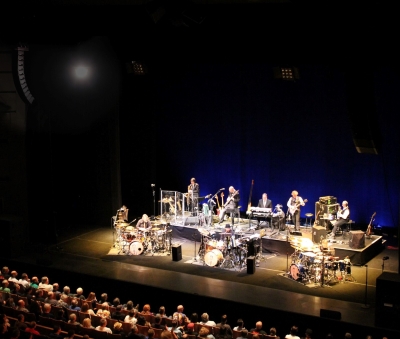 David Taylor was impressed with the X-Line Advance system as well. “The EV X2 system is very powerful, which gave us plenty of extra headroom,” he says. “I found that it was very responsive and reacted well to EQ, which is critical for creating clarity. You have to be able to clear a space for things like the interplay between articulated guitar parts among all the cymbals, and to bring out Tony Levin’s parts in the bass register.”

Taylor and Porter were also impressed with the accuracy of EV IRIS-Net system control. After walking the room during sound check, the engineers requested a bit of shading to smooth out the response in the balcony.

“The network control made it a simple matter to just turn down two boxes of each array by a couple dB, which made a significant difference,” notes Porter. “It was very responsive and precise, and there are not many systems out there with the sensitivity to do that effectively.”

Taylor and Porter have experienced a wide range of sound systems on the tour, and were asked for their frank opinion of how the X-Line Advance ranks.

“We’ve seen just about every top system on this tour, and I must say the EV X2 compares well to any of them. I was very pleased at how well it coped with this very complex and dynamic music,” says Taylor. “It responded well to kick drums, with the impact and thump we look for, but also had definition in the top end. I would describe it as cohesive, accurate, and very easy to work with.”

Chris Porter adds, “The EV system presented us with a nice, continuous sonic picture. You didn’t feel like there was a physical gap between the arrays and the subs. It was nicely matched, consistent and quite even across all frequencies. I’d be quite happy to use it again.”

The tour is also using a selection of Electro-Voice ND Series instrument microphones.