Sound design driven by the unique capabilities of the EAW loudspeakers, the mounting challenges involved, and basic finances

For more than 100 years, Lansdowne Park in Ottawa, Ontario and its stadium have played an important part of the city’s heritage and landscape, with a recent comprehensive facelift and fix of structural problems including a sound reinforcement upgraded headed by Eastern Acoustics Works (EAW) loudspeakers.

The new system relies on full-range, 2-way loudspeakers from EAW’s QX and MK lines, augmented by SB Series subwoofers and UX8800 processors. All loudspeakers were ordered in their “WP” configuration, which designates a weather-protected finish available in black, white and Pantone matched colors.

The overall design, which included detailed EASE models to show the system’s coverage, was approved by both BAI and the Ottawa Sports and Entertainment Group (OSEG). The AV integration contract was awarded to Montreal-based Solotech’s Gatineau field office. EAW’s ASG team assisted in finalizing the details of the system.

According to Solotech Project Manager Greg Frechette, the decision to go with the EAW design was driven by the unique capabilities of the EAW loudspeakers, the mounting challenges involved, and basic finances.

“This was a challenging installation for several reasons,” notes Frechette. “Since it is an outdoor stadium with the south stands completely exposed to the elements, weather resistance was a major consideration. In addition, some speaker cabinets had to be custom-painted to match their surroundings. Then, the final challenge was the physical hanging of the speakers themselves.”

The lower level seats of the stadium’s north side stands required seven dual-loudspeaker clusters of the QX366, while the upper deck is covered by 11 narrow-dispersion (60 x 45 degrees) QX364 loudspeakers, evenly spaced and individually hung.

Having a rounded roof and being fully exposed to the elements, the south upper deck and end zone seats required a different audio treatment. The main seating area utilizes eight identical clusters comprised of two MK2326i, one MK2394i and a single SB250zP dual 15-inch subwoofer. The end zone seats are covered by four clusters made up of a single MK2394i, the wider dispersion MK8126i and a single 15-inch SB150zP sub.

The stadium loudspeakers were delivered in EAW’s weather-protected black or white finish, and in some cases a Pantone matched concrete grey to blend into their surroundings.

“Everything is performing extremely well,” Frechette reports. “The coverage is very even, which was the critical part of the design, and the sound quality is amazing. I’m pretty impressed with the range and power these EAW cabinets have.”

One of the biggest challenges of the installation was the hanging of the clusters. To save the significant expense of bringing in a crane to lift speakers up to the grandstands, Solotech worked with the construction contractor to pre-install the speakers on the roof structure while on the ground before it was all flown into place.

“Once the roof was in place, all we had to do was final wiring and alignment,” says Frechette. “It saved our client a lot of money, and really shows the benefit of all the trades working together from the ground up.” 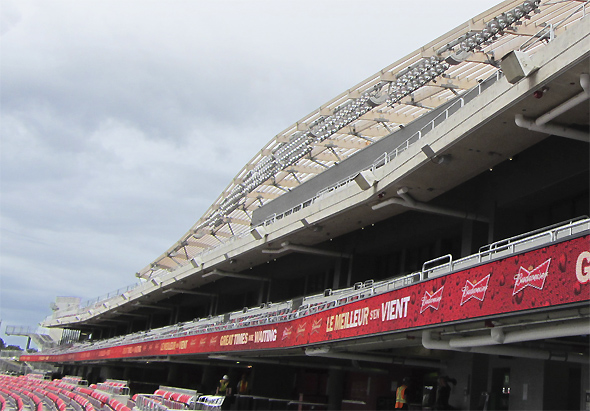