The benefit of drums derives from appropriate usage; a look at approaches and options...

Overwhelming Spectacle?
Once the ladder of progression has been scaled, the church is ready to position a drum set on the platform.

As well prepared as the congregation may be, nothing will equip them for the imposing sight of masses of large drums surrounded by what looks like a dozen stands, each holding a bright cymbal. The spectacle is so overwhelming that it even looks loud.

Bringing out only the snare drum and hi-hat cymbal the first Sunday can effect a better introduction. Later, the bass drum may be introduced, followed by the rack and floor toms at a special musical event when the stage is filled with other instruments, making the additional drums less noticeable.

Thus, the drum set can safely reside on the same platform as the pastor’s podium. The next question to be addressed is which drums are appropriate for a worship environment.

The choice of drums falls between a traditional acoustic set and a state-of-the-art electronic set. While both versions have compelling virtues, the selection generally rests on the needs of the church.

If the room is an acoustic nightmare, with problematic reflections and poor intelligibility, and the drummer is incapable of moderating the playing level, an electronic set is the only choice, due to its ability to be controlled from the sound booth. 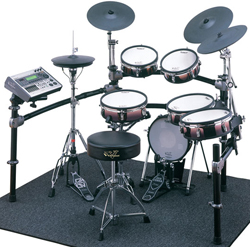 However, if the room is acoustically reasonable and the drummer is willing to play with restraint, an acoustic set will provide the better outcome since even the best electronic sets fail to deliver the nuances associated with an acoustic set.

Manufacturers of acoustic drums hold tradition in high regard and are averse to change. The stalwarts of the industry, Ludwig, Drum Workshop, Pearl, Tama, and Yamaha have embraced incremental improvements to address the conservative nature of the buying public.

A focus on innovation has been in the electronic field. To this point, the Roland V-Drum system is the de facto standard in churches, with Yamaha, Alesis, Pintech, and ddrum all making great strides in performance.

Coming To A Decision
Before the decision is made, everyone involved should be given the opportunity to voice an opinion. The church leadership should then come to a decision with special consideration given to the drummer’s perspective. 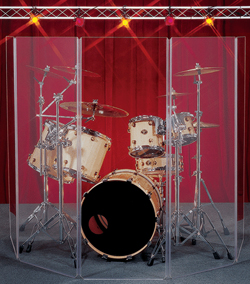 Instead of replacing the acoustic drum set, the drummer could try using Vater Acousticks drumsticks that provide the rigidity of dowel construction with the reduced volume level of Blastix tips. Additionally, Mufflrs, which are acoustic foam rings, may be mounted to reduce ringing.

Finally, congregations can place clear Plexiglas panels made by ClearSonics around the drummer to reduce volume further.

Drums in worship settings can provide an outstanding supplement to the standard instrumental palette while allowing rhythm players in the church an outlet for their talent.

If the percussion items are carefully selected for the application, incrementally introduced to the congregation, and made an integral part of the worship experience, true blessings will abound.

Drums are simply another tool—their benefit derives from appropriate usage.

Kent Morris is recognized for his church sound training abilities. He has more than 30 years of experience working with A/V, has served as a sound mixer for several noted performers and is a product development consultant for several leading audio manufacturers.