Berlin-based Complete Audio, the first adopters of Martin Audio’s MLA platform anywhere in the world back in 2010, has been providing sound reinforcement for German rapper, singer, producer and DJ Alligatoah for many years.

On the recently completed Wie Zuhause Tour 2019 of arenas. Alligatoah was promoting both his new album, Schlafenabletten Rotwein V, and performing classics from his archive.

The artist’s front of house tech Claudio Malaguti was given a massive inventory of Martin Audio enclosures to work with, including 38 MLA, four MLD Downfill, 20 MLX subwoofers and 24 MLA Compact enclosures. 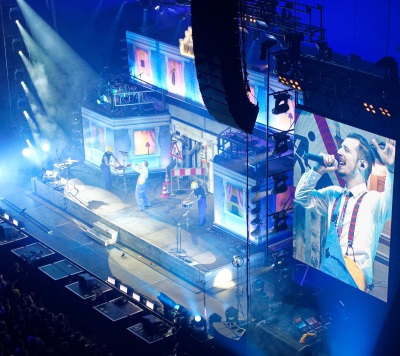 Venue capacities ranged from 8,000-18,000 (at the Lanxess Arena in Cologne), and therefore the rig was scalable.

The Left/Right hangs consisted of between 12 and 16 MLA elements, depending on venue size, with one or two Downfill boxes.

Outfills were provided by 12 MLA Compact per side, and where required, drops of either six or eight MLA elements provided delays at the rear.

The subs were mounted on dollies in stacks of two, distributed alongside the downstage edge as a broadside sub arc. 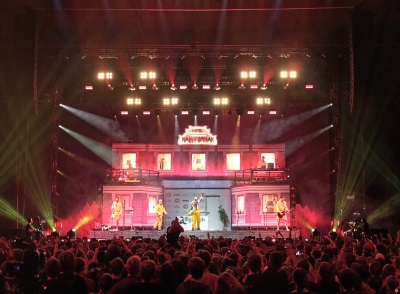 Mixing the sound was Alligatoah’s front of house engineer, Claudio Malaguti, with system tech, Julian Hofmann, responsible for optimizing the sound system, ensuring it delivered an identical sound experience to every seat in the house. They were accompanied by Niko Fuchs.

As Complete Audio MD, André Rauhut explains, “We use our standard venue show files as the basis, and then alter them according to venue capacity, and number of tickets sold, including bleachers. This produced uniform coverage wherever we played.”