There are two ways to assess the quality of audio devices: measuring and listening.

There are two types of blind tests: single- and double-blind. With a single-blind test, one person (the tester) handles playing the music and switching the media or devices without letting the listener (the subject) know which is which. The tester knows but not the subject. The problem with single-blind tests is it’s possible for the tester to give a clue to the subject without meaning to or even realizing it.

In a double-blind test, even the tester doesn’t know which is which. So with wine tasting tests or drug trials, for example, the wine or medicine is labeled only “A” or “B” and the tester merely keeps track of each subject’s choices. Those choices are then given to someone else to tabulate, and only that person knows the identity of A and B.

A double-blind test is difficult to set up and implement, and most people won’t go to that much effort. I believe a single-blind test can be sufficient, especially for informal tests between friends that won’t be published in a peer-reviewed journal.

But there are still important ground rules: The person testing must not look at the test subject, and it’s better if they can’t even see each other. When I test people blind in my home studio, I’m at my computer while they sit or stand behind me. They can’t see my face, and my body blocks the screen and my hands on the keyboard.

Most audio tests compare only two things at a time, such as a Wave file versus an MP3 copy, or D/A converters with music playing through one then the other. The tester plays example A and asks the subject which version she thinks is playing. Then the tester can switch to example B and ask again. It’s OK, and even suggested, to occasionally play the same source twice or even three times in a row. Most subjects won’t expect that, so it can further confirm whether they’re really hearing a difference or just guessing.

Then the same test is repeated enough times to be sure the subject didn’t succeed once or twice by chance. Of course, the tester must keep clear notes of which version is played every time. It’s probably simpler to establish a sequence of A/B switches in advance, then you won’t have to keep stopping to note them all during the test. A typical sequence might be A, B, B, A, B, A, A, A, B, etc. Then during the test you can write the subject’s choices underneath each letter.

Note that being consistently wrong is as significant as being right. If you listen blind to compare media players costing $30 versus $1,000 and you pick the cheaper player every time, then you really did hear a difference. So being correct only one time in 10 is the same as being correct nine times out of 10. You just thought the cheap player sounded better. And maybe it really was better.

Finally, some believe that blind tests put the listener on the spot, making it more difficult to hear differences that really do exist. Blind testing is the gold standard for all branches of science, especially when evaluating perception that is subjective. Blind tests are used to assess the effectiveness of pain medications as well as for food and whiskey tasting comparisons.

There’s no reason it can’t work just as well with audio. Again, if someone is so certain of their hearing, then they should be able to do it blind. It’s true that some types of degradation become more obvious with experience.

Both MP3-type lossy compression and dynamic noise reduction add a slight hollow sound that becomes more obvious with experience and repeated listening. But learning to notice subtle artifacts is not the same as being “stressed” by having to listen blind. It’s reasonable to assume that anyone serious enough about audio fidelity to take a listening test already knows what to listen for.

Nobody will miss a 10 dB midrange boost on a typical music track, but some claim to be able to hear very subtle differences that others might miss. In this case, enough trials are needed to be sure they didn’t guess correctly by chance.

If A then B are played only once and the subjects are correct, there’s a 50 percent chance they were right just by guessing. If they’re correct two times out of two, it’s still 25 percent likely they just guessed correctly. Formula 1 shows what percentage of correct responses we can expect just by guessing at random. 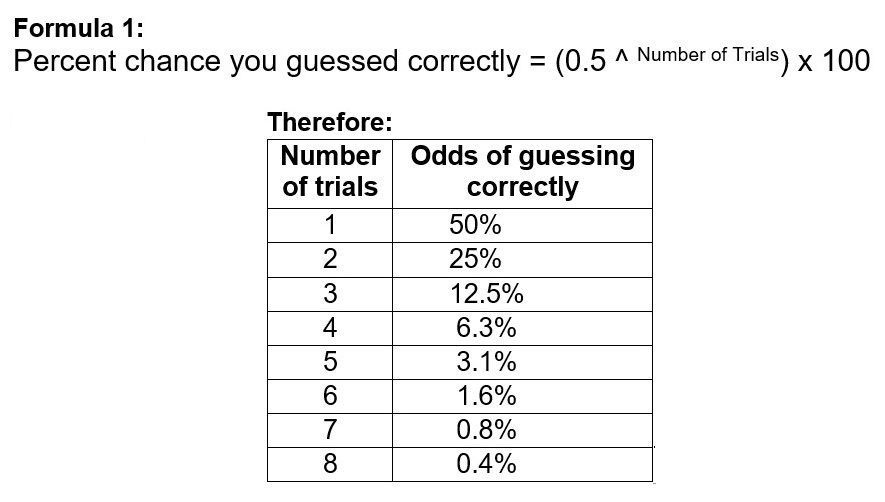 If someone insists he can hear some soft artifact or other anomaly, it’s not unfair to expect him to be correct every single time. If a difference is so obvious that “even my maid can hear it,” as one well-known mix engineer once claimed to me, then he ought to be able to choose correctly every time, no matter how many trials there are.

However, if you test a large enough group of people, it’s likely some of them will be correct by chance alone. For example, if you give a test having five trials (97 percent reliability) to 100 people, three of them could be correct even if everyone just guessed at random! The solution is to ask those same people to do five trials a second time. If they’re correct all five times again, then the odds of having guessed correctly by chance are only 3 percent of 3 percent = 0.09 percent. And in that case they likely do really hear a difference.

Note that the number of trials needed to ensure someone is not correct merely by chance should not be confused with confidence interval in statistics. That’s not the correct term because confidence is related to testing the general population. If you test 1,000 people to see how many can hear the difference between two types of dither, it gives you a good sense of whether most people can hear a difference.

But for audio tests, it doesn’t matter what “most people” can or cannot hear. All that matters is what you or the test subject can identify reliably.

In part 2 of this article, I’ll focus on testing specifics for software as well as hardware including loudspeakers, microphones, cables, preamps and more.

Ethan Winer has been an audio engineer and professional musician for more than 45 years. His Cello Rondo music video has received nearly two million views on YouTube and other web sites, and his book The Audio Expert published by Focal Press is available at amazon.com and through Ethan’s own web site ethanwiner.com. Ethan is also a principal at RealTraps, a leading manufacturer of high quality acoustic treatment.
All Posts
PrevPreviousTwin Lakes Church Upgrades With Electro-Voice And Dynacord
NextUnderstanding Modern Power AmplifiersNext
Top Stories
Explore All Study Hall