Taking a look at one of the most utilized, least respected, and necessary pieces of gear in the toolbox.

The most utilized, least respected, piece of gear is the DI box and that needs to change. This signal converter guarantees we have a strong signal to mix and it can pass an unaltered signal or be used to selectively color the signal.

Known as a DI unit, DI box, direct box or simply a DI, it’s an electronic device that connects a high impedance line level signal with an unbalanced output (a piece of equipment) to a low impedance mic level balanced input, usually via XLR connector. But the origin of the ‘DI’ name isn’t clear as it’s variously claimed to stand for direct input, direct injection or direct interface.

This conversion needs to happen because a line level signal, such as from a guitar, will lose strength and become distorted once it travels too far from the source. And these line level cables are also susceptible to interference. This is why instrument cables are best kept under 15 feet before they are then plugged into a DI box which converts the signal to a balanced mic-level signal that can run a few hundred feet without a problem.

Any instrument that sends out a line level, from a guitar to a keyboard, needs to run into a DI box on stage. This results in minimal line noise and ground loop problems can be eliminated.

When an electrical signal moves through the primary coil, it creates a magnetic field around the coil. The field then induces an analogous signal in the secondary coil, which appears at the output leads. If the primary has more windings than the secondary, it is called a step-down transformer because the signal level and impedance are lower at the output than they are at the input. I’m almost done.

If the secondary has more windings than the primary, it is called a step-up transformer because the signal level and impedance are higher at the output; however, the power does not increase with respect to the input. Step-up transformers are used at the input stage of mic preamps and adapters to connect a microphone to a line-level or guitar-amp input.

Passive DI boxes are used for straight signal conversion such as for an electric guitar. But they aren’t all the same. Budget-priced passive DI units are more susceptible to hum. Passive units also tend to be less configurable than active. However, batteries are not required, they are simple to use, and the better units are extremely reliable. 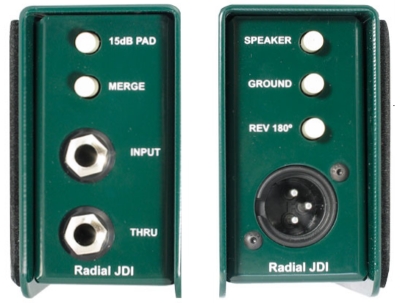 Some models have no settings, while others can have a ground lift switch (to avoid ground loop problems) and a pad switch (to accommodate different input source levels). Some passive DI units also have a filter switch for coloring the sound.

Active DI units contain a preamplifier, can provide gain, and are more complex and configurable than passive units. They do require a power source, usually via batteries, a standard AC outlet, or contain the option for phantom power use. Configurability comes through gain adjustment, ground lift, power source selection, mono / stereo mode, and even EQ controls. They can also have a pass-through option.

A pass=through connector is a second output, sometimes connected to the input connector, that delivers the input signal unchanged, to allow the DI unit to be inserted into a signal path without interrupting it. For example, two active DI boxes could be used to color the sound and the audio engineer could mix the signals separately.

DIs can be used on instruments with electronic circuitry and pick ups that do not contain an XLR balanced output. An example of this application would be an electric keyboard that needs to be connected to a mixer board, either directly or through a snake. Another example would be an acoustic guitar with pickups or an electric guitar or bass guitar that would be mixed through a mixing console into a main or monitor mix.

When it comes to keyboards, if the keyboard includes built-in balanced outputs (usually reserved for the high-end models), you can use these output and bypass a DI box. However, if only a line out option is present, then use a passive DI box. If monitor amplifiers are also to be driven directly from the keyboard, the DI unit must have a pass-through connector.

The DI box is the unsung hero that guarantees the great sound on stage is also available at the mixer so we we have the best mix ingredients.

Chris Huff is a long-time practitioner of church sound and writes at Behind The Mixer, covering topics ranging from audio fundamentals to dealing with musicians – and everything in between.
All Posts
Top Stories
Explore All Study Hall

Vibe up dull snare drums, energize a piano, add some "room" to sounds, enhance that kick and build a tunnel...

"We never did discover who flipped on the low-pass filter switch..."