At the upcoming 2009 InfoComm show in Orlando, DiGiCo announce that it plans to spotlight the anticipated MACH2 Software Suite for the SD7—now available onboard all new SD7 consoles and as a free upgrade to all existing SD7 owners.

MACH2 Software Suite unlocks more power from the Super FPGAs in DiGiCo’s Stealth Processing engine and brings with it a number of enhancements:
—DiGi-TuBe (the world’s first Super FPGA preamp tube emulation, with full drive and bias control, available on all 256 processing paths, including channels, auxes, groups or matrix);
—Dynamic EQ (individually switchable and now available on all 256 processing paths and on all four EQ bands);
—Multi Band Compressor (on all 256 paths, adding an extra two compressors per path);
—Effects (another first are the 16 floating point stereo Super FPGA Stealth digital reverbs);
—Talk-to-bus with dim function (designed with the monitor engineer in mind, this is a dedicated talkback channel that can be routed to any aux buss, allowing direct communication to any wedge or in ear mix);
—8 bands of Parametric EQ (now available for all 128 buses for auxes, groups and matrix adding a considerable 512 bands of EQ to the console).

Powering the SD7 is DiGiCo’s latest in high density digital processing, the all-new Stealth mixing and routing engine exclusive to DiGiCo. Based on the latest incarnation of FPGA (Field Programmable Gate Array) technology, known as Super FPGA, it’s a core component of the SD7’s design.

Allied to two of the latest generation of SHARC effects, dynamics and control processors, it endows the console with eight times the overall processing power of a DiGiCo D5 Live. Benefits are 128 simultaneous 192kHz signal paths readily achievable, or 256 at 48kHz/96kHz, plus 448 simultaneous optical and 224 MADI and 24 integral connections, 128 buses plus 32 matrix buses, and 32 graphic equalizers.

The SD8 has a fixed architecture and employs a smaller Super FPGA than the SD7, yet it benefits from all the major features and versatility of the acclaimed DiGiCo D Series, plus the advances already made in the SD7. It incorporates the Stealth Digital Processing, based on the aforementioned single Super FPGA, and combined with Analogue Devices Tiger SHARCS, forms the Tiger SHARC FX engine. 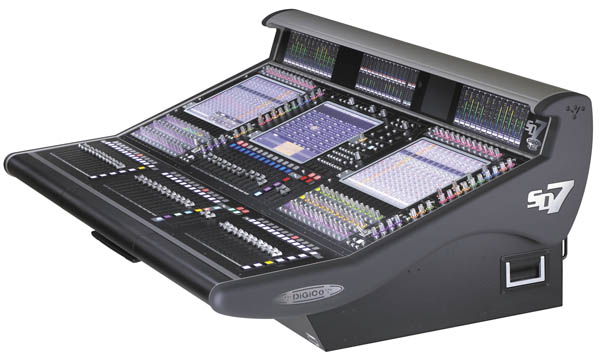 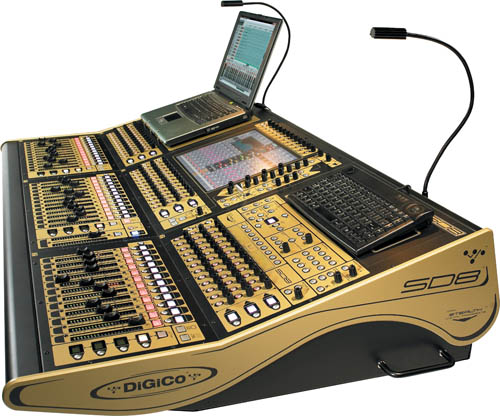