Four-time Grammy Award-winner Ed Sheeran learned his craft busking on the streets of London, Dublin, and elsewhere. As a result, he can, like few other performers, create an intimacy with an audience even in the massive stadiums he’s playing in on his current global ÷ (Divide) Tour, his third world trek, named for his latest studio album, and which has taken him from Turin, Italy in March 2017 to Cape Town, where the tour concludes in March 2019.

At every stop along the way, a DiGiCo SD7 console, supplied through the tour’s SR provider, UK-based Major Tom, is the link between Sheeran onstage and thousands of fans in huge venues, such as PNC Park in Pittsburgh, Rogers Centre in Toronto and the FNB Stadium in Johannesburg. The SD7 and its single SD-Rack are piloted by Chris Marsh, who’s been Sheeran’s production manager and front of house engineer since Sheeran’s + Tour in 2011.

Remarkably, Marsh is simultaneously mixing the singer’s vocals and his guitar—the latter fed through a dynamic capsule expressly for vocal loop building—as well as his wedge and IEM monitors all on the SD7. The console is also used as the matrix for the Clear-Com FreeSpeak II wireless intercom the crew utilizes during the show. It is, says Marsh, “the only console that I could use for a tour and show like this. It does it all.”

Mixing a solo artist in front of tens of thousands of concertgoers is more complex than it might seem. As March explains, “Unlike with a band, every little imperfection is immediately apparent, any little irregularity in the sound or what might happen on stage is magnified. If the fourth violin in an orchestra falls out for some reason, no one would notice. But for a solo performer, there’s nowhere to hide.”

Thus, Marsh says the ability to put virtually everything he needs on one surface makes managing a show like this much easier and more predictable. 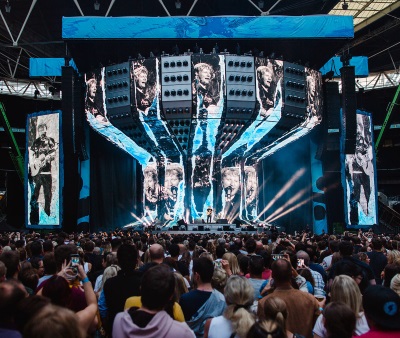 “I have to listen carefully as Ed builds loops on stage to keep the sound consistent, and I have to be ready when he changes guitars between songs, or if he should break a string. On the SD7, all of the controls I need are completely accessible all the time, and I can keep an eye on everything using the meterbridge while still keeping my attention fixed on the stage. The dynamic EQ is also a huge help, especially on his guitar, because his playing level can vary quite a bit and quite often. And the Audio Enhancer feature on the desk really helps me shape the low end on the guitar.”

But, Marsh, an SD Series user for years, starting with an SD11 eight years ago, is quick to point out that the sound of the SD7 is where it all starts. “I was brought up as an analog person and the SD7 just has so many of those qualities,” he says. “The EQ has great functionality, but at the end of the day it’s also so natural and musical sounding. There’s a lot of nuance to the sound of Ed’s show, and with the SD7, I can find it and enhance it. Nothing else even comes close.”