Dialing It In: Optimizing The Live Acoustic Guitar Mix

Part of the mix process is bringing out the natural sound of these diverse instruments.

Misuse of EQ is another common problem. The biggest mistake is believing the guitar should sound great all by itself. Several years ago, I penned an article titled “Why You Should Create a Bad Sounding Instrument.”

While the idea might seem extreme, it’s actually not. Four instruments that sound great on their own will not necessarily meld in the mix when brought together. A solid method for initial EQ work is cutting offending frequencies and then listening to the new combined sound and making proper adjustments.

Second, and much more common, is going against the guitar’s natural tone, and this should also be taken into account in relation to other instruments on stage. Acoustic guitars produce a variety of natural tones, depending on the wood used in their composition. Some offer warm tones, while others are bright.

Part of the mix process is bringing out the natural sound, and sometimes while also balancing in relation to any signal processors the guitarist uses. When acoustic guitar is too bright without any boosts in my mixes, I first look to the 3.5 kHz range to make some cuts.

One more common problem is an acoustic guitar mix that lacks presence. When facing this, start with boosts in the 1 kHz to 3.5 kHz range to add definition and then move down to the 600 Hz to 800 Hz range for additional meatiness (depth). It’s also a good idea to look for frequency areas for cutting so that other frequencies can shine through.

Most of these problems can be avoided by applying a 3-step process on the acoustic guitar channel. First, clean up the low end by engaging a high-pass filter. The presence of drums and bass means frequencies below 100 Hz can be cut. Experiment to find the best spot for your scenario. 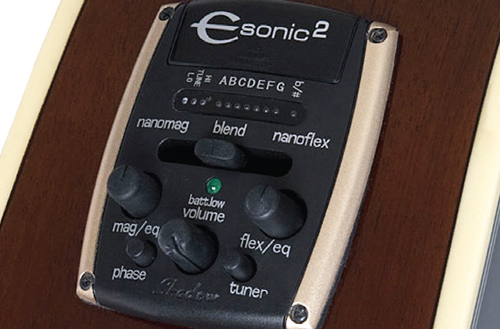 Next, clean up the guitar sound by cutting offending frequencies. Sweep through the mid-range frequencies, using a narrow Q value and a 6 dB cut until you get a better sound. At this point, problems existing at the guitar level should be apparent.

Lastly, turn to cross-channel mixing. Set the instrument’s volume in the right relationship to the other instruments and mix across channels. If there are two instruments competing for the same dominant frequencies, decide which instrument should own them, gently boosting it while (also gently) trimming the other.

The good news is most acoustic guitar mix problems are easily corrected. Although, I once had a guitarist who wouldn’t replace his old tinny-sounding strings for three gigs in a row. By the fourth gig, I walked in with a pair of wire cutters…

Chris Huff is a long-time practitioner of church sound and writes at Behind The Mixer, covering topics ranging from audio fundamentals to dealing with musicians – and everything in between.
All Posts
PrevPreviousCanada’s Southern Alberta Jubilee Auditorium Equipped With Clear-Com
NextCheap Trick Performs At Las Vegas’ Foundry Hall With Danley Sound Labs (Video)Next
Study Hall Top Stories
Explore All Study Hall