Making those voices sound better in the overall mix in a quick, efficient manner...

I love reverb on vocals.

It stands to reason; I grew up in the 1970s and 80s, when there were many records made with tons of reverb on vocals.

Today, the pendulum has swung the other way and vocal reverb has become more minimalist. I’m not necessarily against minimal reverb on vocals, but I do often think that reverb covers a multitude of sins. And when we’re mixing audio in churches, having a little extra “awesome sauce” can really help vocals sound better.

There are a ton of approaches to getting vocal reverbs dialed in. I won’t begin to tell you that I have the definitive method, but I’ve learned a few things. While musical styles vary at different churches, one thing that’s fairly common is short rehearsal times.

At the last church where I mixed regularly, we would get one, maybe two passes through a song during rehearsal before the band moved on. We had about 90 minutes to rehearse the set, and then it was service time. The band and the engineer had to get to the point – quickly.

The challenge, of course, is to get the reverb sounding really good, really fast. It’s even more of a challenge when we had volunteers mixing. I was in need of a method I could teach quickly and would deliver consistently good results, even by people who were not career engineers.

I found an iOS calculator app (Audiofile Calc) that would turn beats per minute (BPM) into milliseconds and gave it a shot. Most of the time, a 1/16th note is about right. If the tempo of the song is very slow, I may deviate from that, but generally speaking a 1/16th note delay sounds quite good.

So that was our trick for getting the delay set for each song. But how about reverb times? One could make the argument that a basic plate reverb with 1.8 to 2.0 seconds of delay would be fine for most worship sets. And I suppose that would be fine.

But I’m a perfectionist and I care about my craft, so I’m not really interested in fine. I’m looking for great. Getting there means paying attention to details. And in this case, setting a reverb time that matches the song is a detail worth attending to. 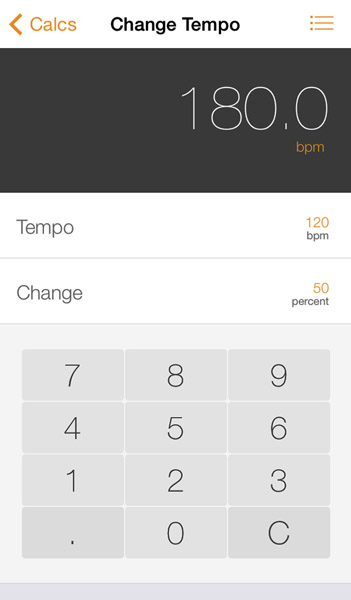 The change tempo function, one of many offered in the Audiofile Calc app.

Pulling out my trusty BPM calculator, I started punching in different reverb times. And again, I found that I could quickly get to a pleasing sound. There is more variation here, however, because songs vary so much in energy and tempo. While a 1/16th note is a great general rule of thumb for delay, my reverb decay times vary between a half note and a double whole note.

Usually we knew the song well enough to know if we wanted a more subtle reverb or a more pronounced one, so we could pick the time quickly. Sometimes we had to experiment with times, but always got to good results quickly.

And sometimes we would even pre-build snapshots with the reverb times programmed in before rehearsal even started, and then left them alone unless something didn’t sound right.

While the Audiofile Calc app was quite useful, it could be a bit tedious to scroll through all the note options.

I then borrowed another trick from my friend (and noted church sound tech) Dave Stagl and made up a spreadsheet of tempos between 65 and 120 with all of the time values for 1/32nd to double whole notes.

So instead of grabbing the phone, unlocking it, typing in the tempo and scrolling to the right note, I could grab the printout, look to the row with the right tempo and grab the time values. Simple and fast. Laminating the document helps it last longer.

Of course, when there’s time to build very custom reverbs for songs, it’s worth doing. For big events, we would multi-track rehearsals for the service a week in advance, and I’d spend a few hours really dialing in the reverbs for best results. But when time is of the essence, this really helps.

Another thing to keep an eye on is the EQ on the vocal reverb. I typically high-pass mine somewhere in the 250 to 400 Hz range, which keeps it from muddying up the vocals. 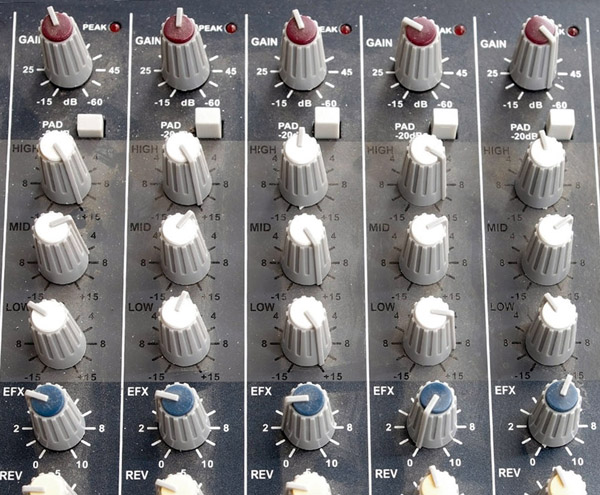 Also keep an eye on EQ with vocal reverb.

I also usually low-pass them down to anywhere between 3 to 6 kHz, again depending on the vocal, the song, and the sound system. Excessive high end in the verb can be annoying and cause it to stand out as an effect. And usually we don’t want that.

If you really want to have some fun, try stacking reverbs. By this I mean use different reverbs for different parts of the frequency spectrum. It’s a trick I learned from my friend Andrew Stone. (In case you haven’t noticed, I basically just steal stuff and try to make it my own.)

Note that this is just a general discussion, and you’ll need to experiment. But it’s a start. The idea is to use a longer reverb for lower frequencies and a shorter one for higher frequencies. This is how reverb works in real life. High frequencies tend to die out quickly, while lower ones will bounce around some more. You don’t have to use different types of reverb for this to work, but I like the variation. Also note that there needs to be some crossover between the two, or you’ll end up with a weird hole.

Even though it’s two reverbs instead of one, I set the times based on tempo, so that goes quickly. Once I’m happy with the high- and low-pass filters, they don’t change much from song to song. And with two faders for reverb, you can tilt the sound of the reverb from lower to higher depending on the song or part of the song.

It’s the best of all worlds: quick, efficient and lush. What’s not to like?

Mike Sessler has been involved with church sound and live production for more than 30 years, and is the author of the Church Tech Arts blog (churchtecharts.org). Based near Nashville, he serves as the Maker of Magic for Vantage Pro, which provides design-build production solutions for churches and other facilities.
All Posts
PrevPreviousMontana’s Tippet Rise Art Center Equipped With Alcons Audio
NextA Heavy Load: Amplifying Orchestral Instruments At Rock Concert LevelsNext
Study Hall Top Stories
Explore All Study Hall