Roostertail waterfront entertainment venue, overlooking the Detroit river and named for the spray created by hydroplane racing boats, was founded in 1958 by Joe Schoenith as a combination restaurant and nightclub. It originally hosted celebrity performers such as Aretha Franklin, Tony Bennett, Eric Clapton and the Rolling Stones, and is now a premier event facility for weddings, proms, corporate meetings, charity functions and holiday parties.

This year, Roostertail is currently undergoing an extensive infrastructure and cosmetic refurbishment which includes a new sound system comprised of Martin Audio CDD8 loudspeakers and CSX212 subs in the elegant downstairs room. 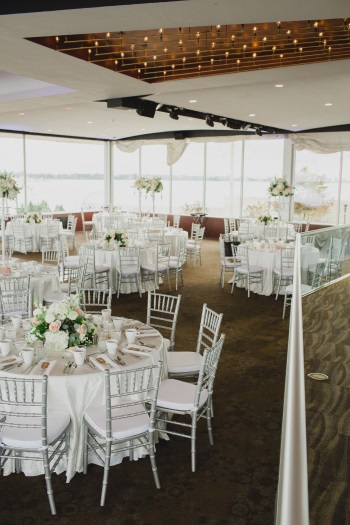 As the installer, Joel Faddol of Thunder Audio explains, “Always the ultimate high-end venue over the years, Roostertail has two stories with a club room and upstairs and downstairs banquet halls surrounded by huge glass windows and a tremendous view of the river. It’s one of the most elegant places in Detroit so it was a big deal that they let us change the speakers as part of this upgrade.

“For the main room downstairs where they wanted coverage from the stage to the bar area in the back, we were fortunate the client had no problem with eight CDD8’s mounted around the room.

“On the other hand, they wanted us to hide the subs, so I found a couple of pockets by the window up near the Art Deco ceiling for two CSX212’s by the stage and we put two CSX212’s further back in the corners of the room. For amplification, we used Martin Audio MA5.2K and MA5.0Q amps with a DX2 loudspeaker management system.

“Ultimately, we ended up creating three zones, one for the dancefloor and two for the flanking areas so they can better control the subs to get a bigger sound when they want to really thump the room and dial it back for speeches at weddings, meetings and other events where we didn’t want to drown out the conversation on both sides.”

Schoenith adds, “The downstairs hall is our most popular space and it needed an audio upgrade because the original system was over fifteen years old. We wanted a number of speakers to cover the room, but our challenge was providing audio without blocking the view from our 12 foot-high by 10-foot-wide glass windows.

“Joel was able to find the right sized speaker, a Martin Audio CDD8, to deliver the punch we were looking for and still be small enough to be hidden away in the limited soffit space that’s available. As it turns out, we couldn’t be happier with the speakers because of the way they cover every part of the room so effectively for music and speeches. The new sound system solved all my needs and gave me all my wants.

“Ultimately, I don’t know how many speeches need subwoofers, but we’ve got them. And when we’re hosting potential clients, we can tell them we have a state-of-the-art Martin Audio sound system.We really like to crank it up after an event when we’re breaking down and cleaning up the room. That’s when we play the music as loud as we can and I get nervous that the subs are going to break some of the windows.”

Faddol concludes, “It really helped us that Roostertail was able to use the system immediately. We were tuning it on a Thursday night and it was up and running for the first of two Hydroplane race parties on Friday. They loved the sound on the floor and the client couldn’t have been any happier.

“CDD’s dispersion, coverage and imaging is far superior to anything in its price range. The audio quality is outstanding and we didn’t need to do any EQing to speak of. Some people had doubts about the 12-inch subs but they gave us more than enough for what we needed. Next up is a Martin Audio CSX218 for the upstairs room and that system will totally roar once it’s installed.”