The dBTechnologies full-scale VIO L212 line array, together with the VIO S218 subwoofer, powered the Lion Stage during the 2019 edition of the the Rototom Sunsplash reggae live event in Europe.

The festival was born in 1991 in Codroipo, Italy, and grew steadily until it moved to Benicassim, Spain in 2010. This year 202,000 attendees from 76 different countries crowded the 120 live concerts, and 7 million people could enjoy all the musical events thanks to the live streaming.

Thanks to the choice made by Rototom Sunsplash’s organization, the VIO Series systems powered the Lion Stage, one of the most important venues in the festival’s vast ecosystem. With a non-stop program that honors the long Spanish days until the end of the night, dBTechnologies line array system played for the four daily live shows on the stage curated by A/V provider Sagarmanda. 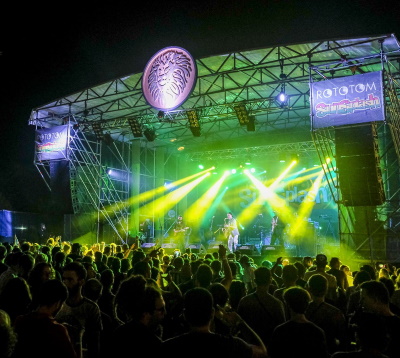 Giorgio “Kobra” Carneli is the technical director of Rototom Sunsplash 2019: “For twenty-five years I have been responsible for the technical production of Rototom Sunsplash, specifically in the field of live event production. The first time I was able to listen to the VIO L212 system was during a demonstration at dBTechnologies headquarters in Italy, and I was pleasantly surprised by the sound quality; the real potential of the PA emerged in the live situation. In facts, the VIO performance on Lion stage exceeded the best expectations: powerful and well-defined bass, clear and balanced midrange and treble. Finally an Italian audio product that can compete in an international market. I’d like to thank dBTechnologies for its human and technical support.”

Massimo Gianaroli, technical director for Lion Stage, a professional in the reggae world for fifteen years and a regular collaborator of the Festival for five years, expressed a complete technical opinion on the performance of the VIO Series system with regard to the characteristics of the location.

“We must consider that we are inside a huge festival that is actually a city with many different venues, so the coverage of each area must be targeted so as not to interfere with others; in this situation the prediction of the control software has proved to be fully corresponding to the actual performance, ensuring optimized coverage and linearity. A second critical point was the positioning of the PA that was very close to the stage: I must admit that we have not had any problems of interference with the stage front or the monitor world that was placed 2 m behind the system on the same bay: the PA proved to be very ‘silent’ at the back.

“The assembly and disassembly, moreover, were very quick,” he continues, “the mechanics of VIO L212 are definitely well conceived.” Concerning acoustics, Gianaroli says: “I appreciate the definition in the mid-high range and the good phase linearity over the entire spectrum. We have used VIO L210s and VIO S118 subwoofers as side fills and they proved to be extremely effective, with a really precise and faithful sound reproduction. I received a lot of positive feedbacks from various front of house engineers and sound professionals who already knew the PA, but could appreciate it even more with this particular configuration.”

From August 17, after the evening dedicated to the pre-festival, the show reached its climax and the stage opened to the guru and founding father of British dub Mad Professor, joined by The Next Generation of Dub and International Dub Ambassadors, artists with an explicit philosophy that propose a comprehensive collage of dub-reggae, direct evidence of the fascination inter-Caribbean which permeates the genre reggae and many other unique artists, strong identity and representative of the soul of Rototom as: Gentlemen’s Dub Club, Rhomanife, Bednarek, Aaron Nigel Smith, Taïro, Eva Lazarus & The Young Robotics, Lasai & Forward Ever Band, The Dance Crashers, Marina P & Stand Patrol, Brusco & Roots in the Sky, Jamaleònics, Koers, All B & The Dub Troubles, Pierre, New York Ska-Jazz Ensemble, Micah Shemaiah, Womens Soldiers, The A1 Crew, Itaca band and the virtuoso StoneBwoy & The Fireman Crew, Istituto Italiano Cumbia; Naâman, Tworoots Backing Band together with the singer-songwriter Reemah Music. 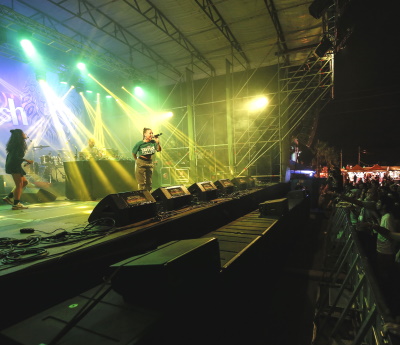 Many and numerous were the positive comments from the front of house engineers of the bands. Among these, Marc Espinosa, front of house engineer for Koers, a renowned Spanish band, who is now one of the best contributors of contemporary reggae, says: “Rototom Sunsplash 2019 was my first time with VIO L212 and VIO S218 and it was a great experience. The venue was very large and the PA covered the whole area without any problems. I only did the soundcheck with the headphones, but when the band started, I just turned up the volume and could enjoy a great show.”

First experience with VIO Series systems also for Anil Ramphal, front of house engineer for Reemah Music and Tworoots Backing Band, who enchanted the audience with a surprising and engaging live performance; the first impression on the system, he explains, was very good: “The stage was equipped with dBTechnologies line arrays and I was very curious about the sound. During the soundcheck the PA immediately proved to be powerful with an optimized coverage behavior. The system sounded balanced in all positions in the venue: far or near the stage or even close to the speakers. As everyone knows, the time for a soundcheck is very limited at Festivals. I could tune the front of house mix quickly and the sound quality impressed me very much, even with a 100 dB upper limit. I can’t wait to meet again the VIO L212 system on my next tour,” Ramphal concludes smiling.