From the moment the Zac Brown Band first took the stage at Nashville’s Bridgestone Arena, this year’s Jekyll + Hyde Tour left a large footprint wherever it went.

Bigger, bolder, and just plain brashly beyond anything the group has ever staged before, the tour rolls with stadium-ready production that easily adapts to sheds and arenas.

Consider that the stage is three stories high, and, given the right place to stand, illuminated with enough LED screens to be clearly seen from outer space.

With a set list known to feature no less than 14 of 15 cuts from the new Jekyll + Hyde album, the show has additionally been graced with guest appearances by the likes of Kid Rock, Jewel, and Bela Fleck.

Choirs commonly sit in, and as a demonstration of its genre-bending prowess, the band has been covering The Beatles’ “Let it Be” and Queen’s “Bohemian Rhapsody,” sauntered casually into EDM, and even co-opted a quasi-show tune.

The tour, which is slated to wrap in December, will have completed nine stadium dates before it ends, including the first show ever at Coors Field in Denver, two shows at New York’s Citi Field, a three-night stand at Fenway Park in Boston, and a stop at Wrigley Field in Chicago. 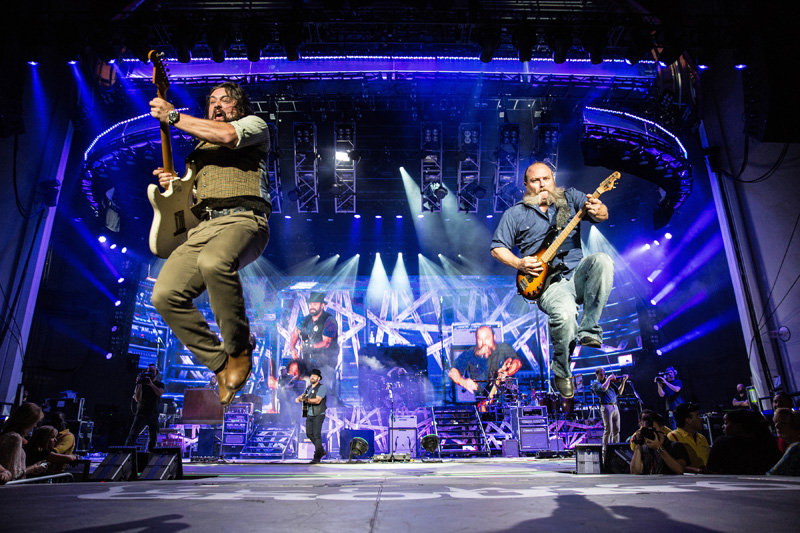 Perfect Marker
“If you’re trying to get your head around what’s going on out here,” says systems and FOH tech Preston Soper, “the Fenway run makes a perfect marker. When we did that we had just come out of Coors Field, went home for a couple days, came back out and did a arena in Boise, ID, went on to The Gorge Amphitheatre, an iconic, very large venue in Washington that some consider one of the most scenic concert locations in the world, and then right into an amphitheater. To be successful in these diverse kinds of environments, you have to have the right tools to maintain both sonic excellence and consistency.”

Soper, along with fellow audio tech Chris Demonbreun and crew chief Vic Wagner, meet the challenges of these diverse venues with the aid of an L-Acoustics K1/K2 rig supplied by Sound Image. In a typical shed hang, there are a dozen K1s per side on the mains buttressed by six K1-SB cabinets per side.

KARA cabinets spread out at a rate of three per side for the main/underhangs, while a sum total of 20 K2 enclosures join in for aux coverage. In addition, a dozen SB28 subs hug the ground and six more KARA boxes stand-in at front fill.

“You can probably count on one hand how many sound checks we get in a year,” Soper notes. “That’s why the system’s consistency in performance is so important to us. We get a line check in the afternoon with the backline techs and along with virtual playback, we’re able to hit our target curve for each show with relative ease every night. A nice, neutral curve is what we’re going for, not too saturated in the low-end, with a linear slope of about 3 dB per octave from low to high.” 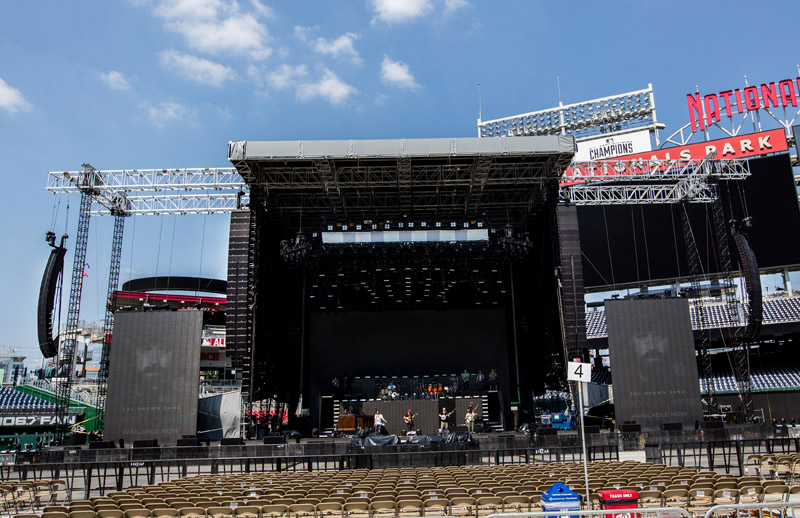 Powerful Tools
L-Acoustics Soundvision allows the crew to render each environment in 3D, place the loudspeakers in that virtual environment, and then view what the EQ is and SPL will be over the entire coverage area.