The “Kinnick Wave” is an event that happens at every University of Iowa Hawkeye home game. The newly-completed Stead Family Children’s Hospital is adjacent to the Hawkeye’s 69,000-seat Kinnick Stadium, and someone suggested on social media that after the first quarter, everyone in the entire stadium should turn and wave to the children in the hospital.

Many of them would be with their families on the hospital’s top floor lounge, which gives a great view of all the action on the field. The suggestion went viral, and it’s now a well-established tradition. To kick off the 2018 season, AV integration and live sound production company Sound Concepts, of Cedar Rapids, Iowa, brought in a portable Danley Sound Labs system for the halftime show. 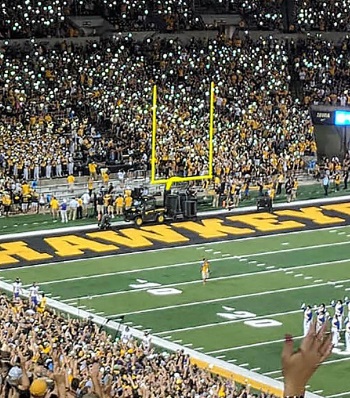 The show featured the Pat Green Band performing “Wave On Wave” with the University of Iowa and Northern Iowa University marching bands while fans did the Kinnick Wave.

A few years ago, Sound Concepts oversaw the installation of a Danley J5-4015 Caleb Horn that covers all of the seating in Kinnick Stadium, and its tight pattern control was selected in part to keep sound off of the children’s hospital. The company’s owner, Marvin Smejkal led both the installation and live sound reinforcement for the special Pat Green Kinnick Wave halftime show.

“The Pat Green Band set up on a temporary stage in the south end zone, which was in place before the game,” Smejkal explains. “They were flanked by about ninety representative members of both universities’ marching bands, which we also mic’d. The majority of the marching band members performed farther up field without reinforcement. Our job was to wheel in (in 1:30 seconds from call of halftime by the officials) a portable Danley system just in front of the band near the south goal post that would project the performance to the entire stadium.”

“The Danley system fit on a 16-foot tow-behind trailer and took just two minutes to get in place and fire up,” Smejkal says. “It wouldn’t have been possible on a college football budget without the incredible efficiency of Danley’s proprietary designs. The Danley boxes are remarkably small given their output, and we were able to power the system with a single rack of amps.”

He continues, “We got great reviews from fans sitting as far away as 700 feet from the system. The Hawkeye coach’s wife is a huge Pat Green fan, and she was sitting near the fifty-yard line. Afterward, she spoke with Jay Ratcliff of Sound Concepts and commented on how enjoyable and clear everything sounded. Of course, most fans were focusing all of their attention on the wave itself and its deserving recipients just east of the stadium in the hospital.”