Danley Powers The Message For “One Lord Sunday” In Wasilla, Alaska

Local A/V firm Sound Decisions created a Danley based system that allowed the churches of Wasilla to gather together.

Every year, twenty of the churches in Wasilla, Alaska join together in the Wasilla Multi-Use Sports Complex for “One Lord Sunday.”

The event highlights the common ground that the denominations share through a mixed-style service that draws on the strengths of the participating churches.

One Lord Sunday brings together some 4,000 congregants, as well as dignitaries such as the Governor of Alaska.

This year, Phil Ballard of local A/V firm Sound Decisions built the temporary sound system that would convey a spirit of unity using Danley loudspeakers and subwoofers, as well as Danley’s newly-introduced amplifiers and DSPs.

Notably, Ballard is on record for the first orders of Danley’s new SM-60 F molded horn full-range loudspeaker, two of which were used for side-fill.

The main house system used four of Danley’s flagship SH-50 full-range loudspeakers, two to a side flown six feet below the 31-foot ceiling, along with four Danley TH-115 and two Danley TH-212 subwoofers.

Two Danley SH-95s (smaller versions of the SH-50) delivered front-fill and down-fill. In addition, One Lord Sunday provided one of the first on-the-ground trials of Danley’s new SM-60 F.

“Like the other Danley products, the SM-60 Fs were remarkably transparent,” reported Ballard. “For a fifty-pound box, it delivers sound with surprising ‘largeness’ and volume.”

“The Danley amps and processing gave the system a seamless and wonderfully-transparent sound that was remarkably easy to set up,” said Ballard.

“My partner was able to walk the floor with an Apple laptop. We used a wireless Apple hub with a $29 switcher to flip between the two DSP units. Although we were ready to tackle anything, the transparent Danley loudspeakers didn’t need much.”

“We pulled out 4 dB at 200 Hz and 2 dB at 300 Hz and that was it. The room didn’t like those frequencies and once we removed them, everything tightened up considerably. Start to finish, system tuning took all of ten minutes.”

A temporary football field was in place during set-up, and the absorption provided by the turf was a decent substitute for the absorption of the people that would fill the room on Sunday. At the FOH position, Ballard adjusted overall system volume on the big day to rise slightly above the volume of the congregants singing along.

“We were measuring 102 dB,” he said. “That seems loud, but we had to overcome the largeness of the room. It felt very natural, given the fidelity of the Danley loudspeakers. Because their beamwidth is so tight, even at very low frequencies, I was able to focus all of the energy on people. By keeping it off the concrete walls and metal ceiling, we reduced the reverb time from five seconds in previous years with line arrays to just two seconds!”

“Apart from my own satisfaction,” he continued, “I received a lot of compliments on the sound this year. That’s saying something, as the worship styles of these twenty churches are far-ranging.”

Read More
Improve Your Church Sound Without Spending A Dime

“Some crank serious SPL with heavy drums and contemporary music, whereas others go a cappella with no sound system at all. The pastors all had great reviews and, more importantly, everyone in attendance was focused completely on the music and the message – not on trying to hear that music and that message!” 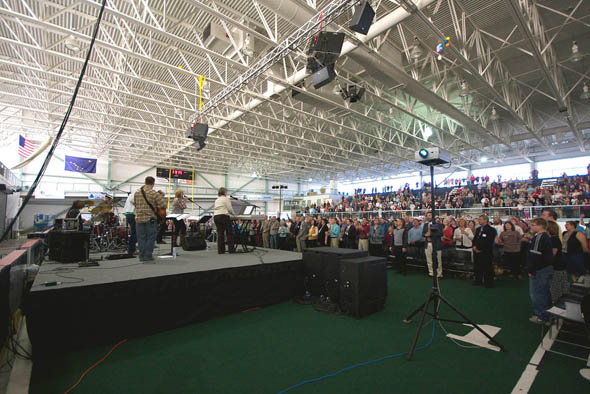