New venue inside the Fiesta Rancho Hotel and Casino provides both live and DJ oriented music with Event Series line arrays and subwoofers.

Located inside the Fiesta Rancho Hotel and Casino, the Kuwa Nightclub is a new concept in Las Vegas where patrons can feel a Latin atmosphere combined with the electronic sounds of both live and DJ oriented music.

Kuwa Nightclub keeps the energy is high with a sound reinforcement system that draws from the Event, Vantec, and Action Series catalogs of Valencia, Spain-based D.A.S. Audio.

Headquartered in Los Angeles, International House of Music (IHOMI) was contracted to design and deploy the new system at the Kuwa Nightclub, along with the lighting and video provisions. Oscar Naranjo Jr. is the company’s sales manager and primary audio technician. He discusses the Kuwa Nightclub project and his decision for installing D.A.S. loudspeakers.

“Kuwa’s new sound system is a pretty comprehensive setup,” Naranjo explains. “The house mains consist of 16 Event 210A 3-way active line arrays, with 8 enclosures each for the left and right hangs. Positioned behind each of these loudspeaker clusters and slightly to the side, we placed the D.A.S. Vantec 15A powered 2-way point source enclosures. These cover the outer edges of the balcony. Low-frequency support is provided by 6 Event 218A powered sub bass enclosures, with three cabinets each for the left and right sides, which are positioned underneath the stage.” 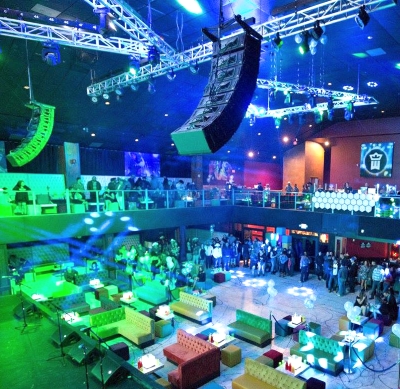 “For front fill,” he continues, “the system includes 2 Action 8A powered point source loudspeakers. For the performers, there are 8 Action M12A powered stage monitors plus an Action 18A powered subwoofer for drumfill while the sidefill setup consists of 2 Vantec 215A powered 3-way enclosures over 2 Action 118A powered horn-bass enclosures—one of each per side. Completing the entire system, the DJ’s booth is outfitted with a D.A.S. Action 8A 2-way point source enclosure. Loudspeaker management is handled via D.A.S. Audio’s DSP-4080 4-In / 8-Out stereo/mono processor.”

When asked about the various attributes of the D.A.S. loudspeakers that made these products so well-suited for the project, Naranjo offers the following comments, “The vertical and horizontal dispersion characteristics of the Event 210A line arrays enabled us to provide even coverage throughout the nightclub, including both the balcony and the main floor. The fact that the entire system uses self-powered enclosures not only streamlined the cabling of the system, it also provided optimal power amplification for the various loudspeaker models. Combine this with first-rate hardware that made flying and mounting the various loudspeakers quite easy, along with a versatile DSP processor and you end up with one very potent and versatile loudspeaker system.”

For a sound system of this caliber, questions inevitably arise, so responsive and capable support services are crucial. Here too, Naranjo was very complimentary of D.A.S. Audio. “We’ve always had a terrific experience with D.A.S.,” he reports. “Ramon Franco, Sales Manager – Touring for the Latin American markets has consistently been very responsive and helpful whenever we’ve had questions. To be honest, the entire team at D.A.S. Audio’s Miami office has been very helpful.”

According to Naranjo, the Kuwa Nightclub’s equipment was installed starting in late September 2017, with the Grand Opening taking place on December 8th. Since then, reports have been very positive.

“Club management, the patrons, as well as the performers, have all been impressed with the system’s performance,” says Naranjo. “The various bands that have performed with the system love it and can’t wait to come back. Similarly, Jaime Sanchez, who not only operates the system from day-to-day but was also closely involved in the entire installation, has been extremely pleased with the way everything turned out. Bottom line… It’s been a win-win for everyone involved.”