Crushin’ It With Brad Paisley On Tour

"My goal is to send the audience home with the feeling that they experienced something rather than just sat back and listened.” -- FOH engineer Kevin Freeman

Breaking its silence, Kevin Freeman’s radio crackles to life with someone asking, “What’s your 20?” Calmly keying the talk button, he responds facetiously, “I’m in the production orifice, you need some help?”

The voice on the other end asks a couple of questions, Freeman responds with a couple of “uh-huhs,” and then quiet returns to the spartan room.

“So like I was saying,” Freeman drawls, returning to matters at hand during a load-in break at the Blossom Music Center in Cuyahoga Falls, OH, “this is one of those venues that’s a bit of a challenge, especially when you roll in with nine truckloads of gear and try to shoehorn it all in.

“The upstage wall is 42 feet wide and 24 feet high, so we have to add more space to the front of the stage and move everything downstage in order to hang the video walls and lighting rig.

“PA-wise we can only hang about nine boxes per side in the mains, and the rest we have to groundstack,” he continues. “That’s why we come in a day early just for setup – it’s a lot easier on everyone’s nerves that way.” 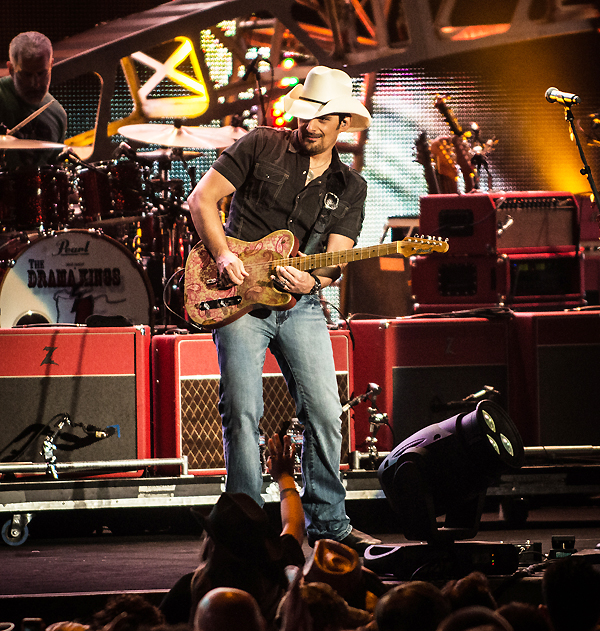 Freeman has been on the road with Brad Paisley for the past 16-plus years. As in the past, this time out for the country star’s Crushin’ It World Tour, he serves as both front of house engineer and the show’s production manager. “With regards to the latter,” he explains, “that means I sit down here in this office and let the guys from Sound Image do all the work, then take credit for everything tomorrow when the show turns out great.”

Musically traditional in many respects with five voices onstage in addition to acres of guitar, bass, pedal steel, keyboards, and driving drums, the tour’s schedule is a further nod to standard country practice, hitting it hard for three dates in a row, going home, then coming out and doing it all again. 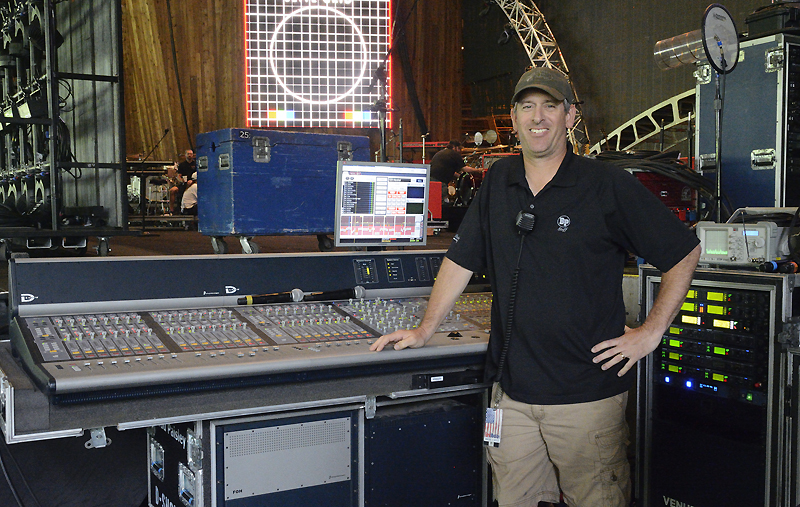 Monitor engineer Mark Gould with his Avid D-Show, and immediately behind him are the tour’s Shure UHF-R wireless receivers topped by the Madell RF spectrum analyzer that he uses for frequency coordination.

Technically, Crushin’ It represents a blend of old and new. “I’ll never speak badly of any digital console, but they’re not for me,” Freeman says, clearly demarcating which side of the old/new fence he straddles. “I took the Midas Heritage 2000 I’m using out of the crate brand new about 14 years ago, and it’s been mine ever since. Shadoan (Sound Image owner Dave Shadoan) really wanted me to get the 3K so he could send it out for either monitors or the house when I wasn’t using it, but I told him I wanted the 2000. I didn’t want to reach over the 19 knobs I didn’t need every day to get to the five I did.

“I just wanted something simple that worked and sounded good every day. This is a real console, not a computer. Signal goes through copper and components, and if it works for me what’s the point in changing? This is a country band. Guys with guitars. Keyboards, bass, fiddle. Brad plays loud. I wasn’t looking to do anything complicated because it’s just not necessary.”

At most of the venues on the tour, the crew is busy flying 12 to 14 arrays of three-way JBL VTX V25-II boxes per side used for the house mains. Nine more of the same boxes generally go up for the aux hangs flanking the left-and-right mains to cover the far reaches of the house. Sixteen dual-18 VTX S28 subwoofers join the club to extend the low frequency content, and while arrayable, these boxes remain earthbound unless there is absolutely no space on the ground at specific venues, with the Shoreline Amphitheatre in Mountain View, CA being one example. 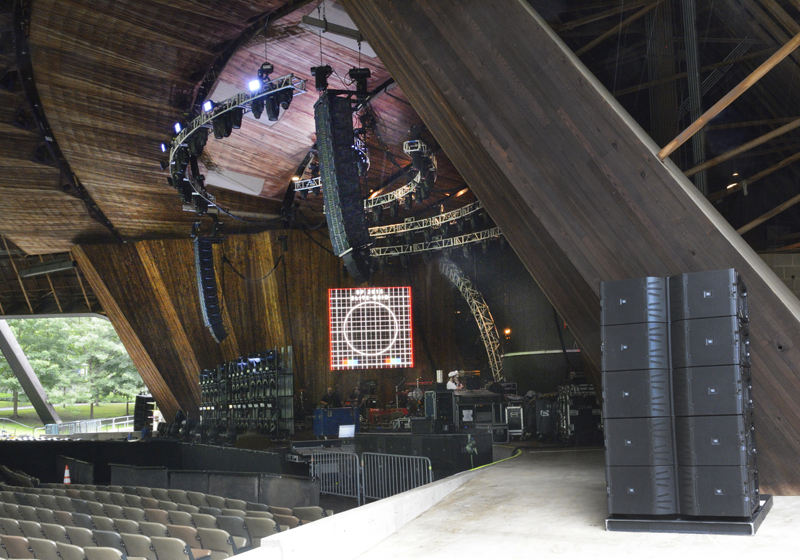 The unique qualities of the Blossom Music Center, which is also the summer home of the Cleveland Orchestra, meant shorter than usual JBL VTX V25-II main arrays, with ground-based arrays on the far wings for side fill.

Like Freeman’s Midas Heritage 2000, the VTX rig takes a beating and keeps on going day after day. “I don’t run into driver problems or rigging issues,” systems tech Bill Chase reports. “It just keeps going up, comes back down, and goes back up again. We updated to the V25-II waveguides, and along with new presets, gained a significant amount of headroom and a ton of added HF capabilities, to the point actually that now I have to re-think the zoning of the entire PA. It takes less boost for longer throws now, and we can run all the way up to 17K without ever looking back.”

With power coming from 41 4,500-watt Crown Audio I-Tech 12000HD amplifiers, processing for the arrays is provided from both the internal circuitry found within the amps and a Dolby Lake Controller. HiQnet Performance Manager software brings a template of control to the amps, and works hand-in-hand EQ-wise with JBL Line Array Calculator II to set delays for the subs, gain, and other parameters. With the Dolby Lake and a tablet or a smart phone, changes can be made across the board, even on the way to catering.