New audio and video systems at conference hall in Zagreb include V2-28 and D8 loudspeakers with D10SUB ceiling-mount subwoofers.

Croatia’s HUST d.o.o. has completed the design and installation of new audio and video systems for the largest conference hall of the Croatian Catholic University (Hrvatsko Katoličko Sveučilište) in Zagreb with loudspeakers from Community Professional.

The idea of a Catholic University in Croatia has existed since the independence of the Croatian state in 1991, but difficult post-war reconstruction, economic and social conditions postponed the possibility until the middle of the new millennium’s first decade. The Croatian Catholic University was established in 2006, making it one of the country’s youngest universities. 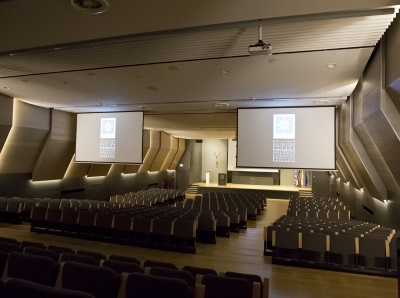 HUST was commissioned to provide the University’s main conference hall with a triple projection system and audio throughout, with a focused sound system for the center screen.

An additional pair of Community V2-28 dual eight-inch full-range two-way loudspeakers is positioned above the stage to focus sound on the main 5.5 meter wide screen.

With basic controls, users have the ability to manage the content source, audio configuration, motorized lowering of screens and room light dimming with predefined scenes. The system is managed at several different levels of administration in accordance with the privileges assigned by user name and password. Designed as a modular system, HUST has future-proofed it to be easily expandable, both at the current location and in additional remote micro-locations, through the University’s LAN infrastructure.

Tomislav Stubičan of HUST comments, “The University is very pleased with the system. Not only has it given them ease of use and all the flexibility they required, but by careful selection of the best products we have given them outstanding audio and video that impresses everyone that uses the room.”