New Orleans-based commercial audio video solutions provider, Crescent Multimedia Solutions, officially partnered with Powersoft Audio over the summer and has since installed Powersoft amplifiers in a number of spaces, including a recent specialized office installation at Zehnder Communications’ new office, as well as institutional applications like the historic New Orleans courthouse.

Crescent president Cory Ancar says, “The physical amount of space that the amplifiers take up is a big deal to us when we start building these larger scale racks. Sometimes you can get kind of carried away with amplifiers when the design pushes you to have two racks. But with the architectural series that Powersoft is offering, we can get away with doing one single AV rack that will house all the amplification we need.”

With additional offices in Baton Rouge, Louisiana, and Nashville, Tennessee, Zehnder Communications recently upgraded its main location by moving into a new space in Canal Place, a combined retail and office building located in the New Orleans’ French Quarter, overlooking the Mississippi River.

As a full-service marketing agency that has grown since 1996 by focusing on marketplace trends, including social media, virtual reality, and voice, Zehnder’s new office required more AV systems — and more amplifier channels — than your average office. The installation included a dedicated editing suite dubbed “The Chop House,” a voice recording booth, a virtual reality room with a green-screen wall, a listening hub, which includes a video wall with six 55-inch Planar TVs, two small conference rooms and a large conference room. 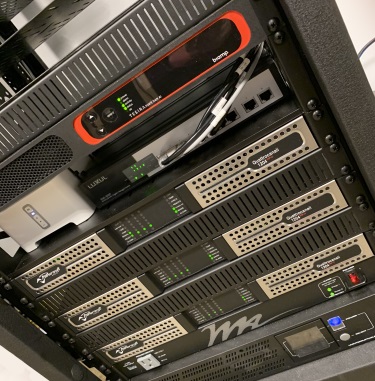 “I needed a lot of audio channels, all running from a centralized location,” Bohrer said. “Each zone operates independently, under normal circumstances. So, when I had to start routing all the audio from all the different rooms to a central location, the Dante, DSP, and the small form factor — those three things together — made everything so much cleaner.”

Bohrer used just three Powersoft Quattrocanali amplifier platforms to power the system, which he said has taken twice as many amplifiers — and twice as many rack spaces — in his past designs. “Then, add in the extra labor that would be needed because of the lack of Dante in most amplifiers, as well as the extra labor for the DSP programming that you miss out on with other amplifiers, and Powersoft amplifiers are just overall more efficient, which equals more cost savings.”

As a marketing firm seeking to both impress and entertain clients, Bohrer said that Powersoft was the ideal solution when it came to choosing an amplifier platform that could help the company power not only its high-end AV production technologies, but also its parties. “Another thing that really brought us to Powersoft with this application was that the client could, from a central location, override all the audio in all the rooms and crank the volume so that the whole office would become a big party area.”

Zehnder Communications’ Creative Operations and Integration manager Shea Duet says that one of the big problems with the old office space was that some of the AV equipment required additional training to properly use, and often he’d walk into a space and cables would be unplugged, or things would be hooked up incorrectly, and it would become messy to fix.

“So, with the office move, I reached out to Crescent because I wanted something that was easy to use, sounded good and served our purposes,” Duet said. “It not only needed to work, but it needed to look killer, and it need to be easy for everyone in the office to operate. And most of all, it needed to be reliable.”

And, since the move in October, the AV systems at Zehnder’s new office — powered by just three Powersoft Quattrocanali 1204 DSP+D amplifier platforms — have been just that: reliable. “We have had zero problems. Nothing has crashed, and we’ve had no issues as far as stuff not working. So, it’s been great.”

In addition, designing the new Zehnder Communications office, Ancar and Bohrer said they’ve already begun to incorporate Powersoft amplifier platforms into designs for future installations, including a recently completed design for a courtroom in the Orleans Parish Criminal District Court. For the Orleans Parish courtroom design, Bohrer said they chose Powersoft — this time the 8-channel Ottocanali 1204 — once again because of its reliable performance, which is especially critical in a courtroom setting.

“The biggest thing with courtrooms is making sure that we get the most speech intelligibility,” Bohrer said. “In this setting, you’re trying to get the most gain before feedback, and make sure you can turn up the volume on the microphone nice and loud so everybody can understand, but you’re not getting any feedback problems.”

While the actual courtroom installation is slated for early 2019, Bohrer said they have also begun using Powersoft in other designs, including a nearby medical center, as well as a multipurpose school gymnasium that also functions as a house of worship.

“When Powersoft came and visited us, we really liked their business model, because at Crescent — just like at Powersoft — quality is everything,” Bohrer said. “We’re not just out to sell, or make the most money. We’re not out to be the biggest — we’re out to be the best.”