Conquering The Beast: One Engineer’s Battle Against The Ever-Present Threat Of Feedback

The story of how I came to conquer a beast that stalks all live events, wrenching both the audience and the performers out of the moment.

There is a beast that stalks all live events, wherever they may be. It lies quietly and patiently as amplifiers are connected to loudspeakers, it sits up alert and attentive when microphones are plugged in, and it crouches, poised and ready to pounce when faders are raised.

When it strikes, it announces its presence with a deathly howl of dissonant damage which dissects the performance, wrenching both the audience and the performers out of the moment.

In that instant, everyone turns to the sound engineers because they’re the only ones who have a chance of confronting the beast and keeping it at bay. That beast is feedback and this is the story of how I came to conquer it.

I first encountered the beast in band rehearsals as a teenager. At the time I didn’t think much about it. It seemed like an integral part of the chaos of those early days of trying to learn how to be rock stars. However, as I obtained bigger amplifiers and more loudspeakers I realized that my decision to pursue a career where the music meets the technology would lock me into regular battle with the beast.

I vividly remember the first time I encountered feedback at a live gig. In that terrifying instant, I didn’t know if it was something I’d done or if someone else had invited it into the venue, but now it was here and I was the only person who could do anything about it. My stomach churned and a chill ran down my spine.

I grabbed frantically at faders trying to find a way to push back the beast without destroying the mix I had taken so much care to build. Thankfully something I did beat the beast back and for the moment I was safe, but I was on tenterhooks for the rest of the gig, my attention less on the intricacies of the mix and more on the lookout for the snarling beast.

In those early days of sonic discovery, the beast rarely left me alone for an entire evening. It was equal parts frustrating and frightening; I was clearly capable of building the kind of mixes that kept the musicians happy and enveloped the audience, but if the beast made even the briefest of appearances then both parties were more likely to go home remembering that one brief moment when my guard slipped. Something needed to be done.

I soon discovered that turning the instruments down in the PA didn’t make much difference, particularly in small rooms where drums and guitars are loud to start with, so I approached the musicians. Very few drummers come with volume controls, and when you ask them nicely to play quietly they soon complain that they can’t connect to the performance unless they hit the drums at a certain level.

Thankfully guitar and bass amps do come with handy volume controls but most guitarists seem to take any suggestion that they reduce their level as some kind of affront, and those that do comply often turn them back up again when you’re not looking. It’s almost as if their ego is more important than the overall performance.

At this time, I started working in the same venue on a regular basis and resolved to find a way to defeat the beast, or at the very least arm myself with enough weaponry to be able to minimize its impact. I noticed that the sound system had graphic equalizers connected to the outputs, so I experimented. 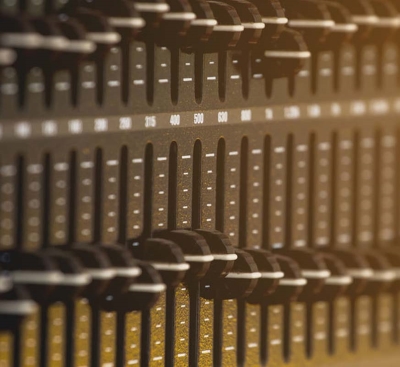 I started coming in early. I set up mics on stage and pushed up the faders while hiding behind the mixing desk in the hope that the beast would make an appearance. When it did, I tried to isolate the specific frequency of its howls and then reduced the level of that frequency in the PA system with the filters of the graphic EQ.

Initially, this seemed to work but as I continued to increase the fader the howls would return at different frequencies so I repeated the whole procedure until I could achieve a reasonable level without the beast rearing its ugly head.

Later, when I had a band on stage, I was easily able to get the vocals to a suitable level, and when the beast did show up the disruption was brief as I was able to beat it back with further equalization.

This was a revelation! I finally had a proactive tool for the battle and was no longer on the defensive the entire time. I could meet the beast on its own terms and walk away triumphant more often than not.

I would go on to proudly tell other sound engineers of this unique method I’d discovered only to find out that they had been doing it for years. They called it “ringing out the PA system.” Part of me wished someone had bothered to tell me about it, but another part of me was glad that I had gone through the process of discovering it for myself.

Now that I had tasted victory, however fleetingly, I was keen for total domination. I wanted to banish the beast forever so I started to do some research.