“I’ve been using TW AUDiO since the spring of 2018,” states Ace Audio owner Mike Goodreau. “We do a wide range of events, from corporate stuff to clubs, festivals, and arena concerts. Every town in Connecticut has a fair or music festival during the summer, and the first week of September, we have eight systems out at once. We use TW AUDiO loudspeakers for as many of these events as we can, and I’m buying more.”

When an old friend invited Goodreau to a TW AUDiO demo, he almost didn’t go. “I’ve been to a lot of speaker demos, and I had been to a couple recently,” he explains, “but my friend said I really should check out TW AUDiO. It takes a lot to impress him, so I went, and I became very interested in the T24N, which is unlike anything else out there. The T24N can do the work of much larger systems. One pair of T24Ns can replace four line arrays from other well-known manufacturers, and it costs the same as one array. It takes up much less space in our truck, and it sounds better than the others.”

For example, ACE Audio supplied a system for the October 2018 Portland Agricultural Fair, a few miles from Goodreau’s home.

The fair is held next to the Connecticut River, and a huge storm flooded the site immediately before the event, creating severe mud problems. At previous Portland Fairs, Goodreau provided four line arrays on each side, on lifts.

“Those amps and line array boxes come in carts and weigh about 250 pounds each,” he notes, “and hauling them down my ramp and into the mud was not going to work. Instead of bringing in a box truck crammed with heavy gear, I brought in a smaller van and set up one T24N and one TW AUDiO B30 subwoofer per side. They’re lightweight, so we picked them up, carried them over the mud, and stacked them on the stage. The system was a quarter the size of what we were going to use, and it did the job better. Everybody was happy.”

Goodreau is amazed by the TW AUDiO system’s sound quality. “We used the TW AUDiO T24N and B30 system outdoors on the Guilford Green for a concert by Beau Bolero, a very good Steely Dan tribute band,” he recounts. “Being Steely Dan fans, the people were very critical listeners. Usually people chat while a band is playing; this audience was dead quiet. They were really listening, and they knew what the music was supposed to sound like. I’ve never had so many people come up to me at the end of a show and tell me how great it sounded. When I’m retired and think back on my career, that show is going to stand out as a highlight, and it’s because of those TW AUDiO T24Ns. They sound so sweet.” 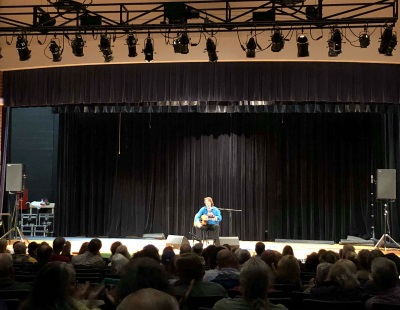 The T24N is available with a choice of two easily replaceable, rotatable horns with 60° x 40° or 90° x 50° coverage configurations.

“I bought a few extra horns so I can vary the pattern,” Goodreau reports. “We swap them to fit the event, which is really cool. That’s less inventory to carry, and it makes the system much more versatile.

“If I’m going to use two T24Ns a side, I can use 60° horizontal x 40° vertical horns, and I can rotate them to make the pattern narrower. If I want one T24N a side, the 90° x 50° horn is perfect. I just worked a show in a fairly narrow tent with one loudspeaker per side, so normally I might choose 90° horns, but the 60° horns worked better because the walls were so close. You can swap horns quickly because you just remove a few screws to remove the front grille, and the horn pops right off. It gives us options, which makes a big difference. In addition to the T24Ns, we bought some TW AUDiO T20s, which are a little smaller, giving us even more options.”

When Goodreau expressed interest in TW AUDiO’s VERA-series line arrays, the manufacturer loaned him a system for three weeks.

“It was a wonderful demo because we got to use them on our own gigs,” he enthuses. “We used three VERA10s and one B30 subwoofer a side, with the tops on crank-up stands, at the Haddam Neck Fair, a local fair for 1,000 people at a time that features a lot of folk and bluegrass music. The VERA system worked great there; we were very impressed. We used the same system at Simsbury Meadows Performing Arts Center’s Septemberfest event, and it sounded amazing. VERA is in my plans for next year’s season, no question. Eventually we’d like to have six VERA10s a side, which we could put up on larger line-array lifters, or we could fly them.

Goodreau used several loudspeaker brands in the past but he is increasingly relying on TW AUDiO.

“TW AUDiO surpasses all the other loudspeaker lines we use,” he confirms. “We’ve started buying TW and phasing out our other loudspeakers. I just sold one system, and I am offering other systems for sale because TW AUDiO has eclipsed all of them. It’s not only how great they sound but also how they’re packaged, the amplification and processing, and their compact size and light weight. TW AUDiO makes fantastic stuff, and I’m so impressed.”