Film and television composer Nathan Barr is well-known for playing and incorporating unique instruments into the scores he creates for hit TV shows like HBO’s True Blood and FX’s The Americans, as well as films like Hostel and Open House.

When it came time for him to create the score of Eli Roth’s new fantasy thriller The House with a Clock in Its Walls, Barr turned to a 1920s-era Wurlitzer theatre organ that has been featured in timeless Hollywood classics, including Journey to the Center of the Earth and the 1951 classic The Day the Earth Stood Still.

Barr purchased the organ six years ago from theater organ expert Ken Crome and spent four years restoring the instrument. The House with a Clock in Its Walls is the first film to feature the Wurlitzer in 25 years and gives the film its distinct sound.

“This particular instrument has a very rich history in early Hollywood films and was an active part of a scoring stage back then,” says Barr, who used a myMix personal monitoring system to monitor the organ during recording. “It’s really versatile and unique, and it’s also a very recordable instrument. The House with a Clock in its Walls takes place in the 1950s and features a gothic setting, so the sound of the organ was a natural fit. We also experimented with it and played it in non-traditional ways. There are a lot of percussion elements like a marimba, xylophone and glockenspiel that are a part of a theatre organ, so we utilized those to great effect.”

To record the Wurlitzer organ for the film’s score, Barr and his team selected the myMix personal monitor mixing system. Recorded at Bandrika, Barr’s brand new 8,000-square-foot studio located in Tarzana, California, the film’s score features a 47-piece orchestra and used three myMix units for monitoring, including one during the live recording of the organist’s session. The myMix was also used for the solo harp and featured at the conductor’s podium during the orchestra’s session.

“What we liked best about the myMix is its ability to control individual channels,” Barr says. “While we haven’t delved into some of the more complex features, the system was a great personal monitor for our purposes. When monitoring so many instruments, it’s nice to be able to control individual volume levels.”

While scoring a project, Barr often records himself playing his own instruments. At his Bandrika studio, Barr currently has eight myMix units set up at different stations, including the Wurlitzer organ, a cello and a piano — letting him monitor each instrument individually.

“This is great because it allows me to bounce around from one station to the other as I record throughout the day for whatever project I’m working on,” Barr explains. “I use it as a personal monitoring system on a daily basis and it works really well for us.” 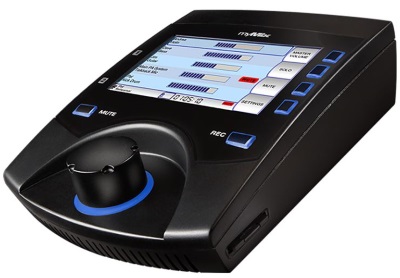 When finished at a station, Barr mutes the unit to avoid getting any bleed from the headphones and enjoys the ability to mount the myMix on a mic stand.

“It is really easy to access when it’s on a stand,” Barr says. “For instance, if I’m playing cello it might be in a different position than if it’s at the piano or the organ, and that’s very helpful.”

A user-friendly interface, the myMix features an intuitive ‘Record’ button that, when engaged, allows the selected audio channels to get recorded in multi-track as 24-bit, 48kHz broadcast wav files. In ‘Play Along’ mode, the two local inputs can be mixed with the recorded tracks. Featuring only one knob, the system is easy for first-time users and musicians without recording experience to pick up quickly.

“Another factor we like about the myMix is that the system is not terribly complicated,” Barr says. “It’s simple and intuitive for everyone to do what they need it to do.”